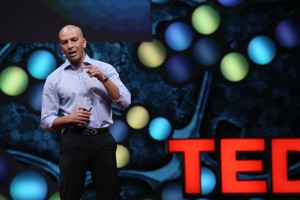 noun - TED Talks are a global set of conferences run by the private non-profit Sapling Foundation under the slogan Ideas Worth Spreading. TED was founded in 1984 as a one-off event; the annual conference series began in 1990.

A number of open water swimmers, physicians and personalities have spoken at TED conferences around the world:

Peter Attia: What if we're wrong about diabetes? at TEDMED

Outside the Box by Angel Yanagihara

Marcia Cleveland at the TEDxWinnetka Women.

Dina Levačić at the TEDxZagreb.

Trinity Arsenault at TEDxEdenHighSchool speech in 2017.

Lucas Carbonaro spoke about 'Can you be both average and extraordinary?' at TEDxHECParis.

An Inspiring Tale of Toil, Tears and the English Channel by Srikaanth Viswanathan at TEDxPESUECC

Story of how I became a record-holder swimmer by Gaurvi Singhvi at TEDxYouth@HGS in Udaipur, Rajasthan, India

Wim Hof at TEDxAmsterdam on 30 November 2010

I have one more chromosome than you. So what? by Karen Gaffney at TEDxPortland on 1 July 2015

Doug Woodring of Ocean Recovery Alliance at TEDxWanChai in August 2011.

Avram Iancu talks about Faith in Dreams at TEDxBucharest on 20 February 2019.

Julie Gautier talks about her underwater choreography at TEDxLausanneWomen on 17 April 2020.

Avram Iancu talks about Faith in Dreams at TEDxBucharest in 20 February 2019.

Ryan Stramrood talks about Gaining The Edge at TEDx University of Johannesburg on 27 October 2021.

Achmat Hassiem talks about Impossible is nothing, possible is me at TEDxSeaPoint on 8 May 2012.

Sara Mardini talks about her immigration from Syria to Germany at TEDxDurhamUniversity on 7 May 2022.

Making memories, what's the point? by Simon Harmer at TEDxWinchester