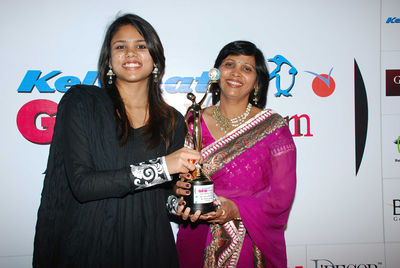 Bhakti Sharma, nominee for the 2014 World Open Water Swimming Woman of the Year, with her coach-mother Leena Sharma, recipients of the Gr8! Women of the Year award

Bhakti Sharma (born 30 November 1989) is an open water swimmer from Rajasthan, India who has completed 2 of the 7 channels in the Oceans Seven. She is currently a Ph.D. Student & Program Coordinator at the University of Florida.

She was awarded the Gr8! Women of the Year award in Mumbai, India together with her mother Leena Sharma and is the youngest female swimmer to swim in the Indian Ocean, Southern Ocean, Atlantic Ocean, Pacific Ocean and Arctic Ocean and the Seven Seas.

Sharma was nominated for the 2019 World Open Water Swimming Woman of the Year award with the following nomination:


Bhakti Sharma has launched a professional career in education and motivational speaking as she inspires the next generation of girls and young women. Her message is based on her success as a channel swimmer, marathon swimmer and ice swimmer in her teenage years, and is delivered by multilingual digital platforms. She has given 4 TEDx Talks and 1 TED Talk on the main platform, numerous TV interviews and public speeches extolling the benefits of a life of adventure, courageousness and resilience. She positively impacts countless individuals as she shares her early aquatic exploits from Antarctica to the English Channel with audiences around the world. She started Swim to Educate initiative in India and has now expanded her message of inspiration to span from India to the U.S. For helping transform lives of students and young people with a message of hope, for sharing her dreams in the digital space and in college classrooms, for her eloquent and passionate talks given in an authentic genuine voice, Bhakti Sharma is a worthy nominee for the 2019 World Open Water Swimming Woman of the Year.

Sharma was nominated for the 2014 World Open Water Swimming Woman of the Year.

"Bhakti Sharma of India is one of those hard-to-believe young individuals who inspire people of all ages and from all backgrounds. Despite her training grounds in the desert state of Rajasthan, the young woman has a comprehensive track record of success including ice swims in the Arctic Ocean, marathon swims from Florida to India, and a solo swim and relay crossing of the English Channel. But she wanted her aquatic exploits to make a difference in other people’s lives besides her own. Her Swim to Educate initiative in India will continue to establish her legacy of inspiring and helping girls receive or extend their schooling opportunities. For her passionate calling to champion girls' education in India, for her creative platform that serves as a catalyst for school reform, for her eloquent passionate, public appeals and speeches on these topics, all described within her prowess and experiences as a versatile open water swimmer, Bhakti Sharma is a worthy nominee for the 2014 World Open Water Swimming Woman of the Year.''