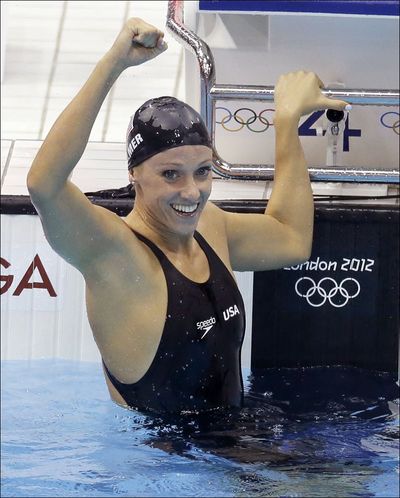 Dana Whitney Vollmer (born 13 November 1987) is an American college and international swimming championship and four-time Olympic Games gold medalist. She has also dabbled in open water swimming and is coached by Teri McKeever.

Vollmer has won a total of 32 medals in major international competitions, including 19 gold medals, 8 silver, and 5 bronze, spanning the Olympics, the World Championships, the Pan American Games, the Pan Pacific Championships, and the Goodwill Games.

Vollmer was born in Syracuse, New York and raised in the Dallas-Fort Worth suburb of Granbury, Texas. As a child, Vollmer swam for coach Ron Forrest at the Fort Worth Area Swim Team (FAST).\

In 2003, Vollmer underwent heart surgery to correct a condition called Supra Ventricular Tachyardia, which produces a quickened pulse rate of about 240 beats per minute. Nonetheless, her heart conditions demand that a defibrillator be kept poolside when she swims as a precautionary measure.

Vollmer is married to Andy Grant, a former Stanford swimmer.

At age 12, she was the youngest swimmer competing at the 2000 U.S. Olympic Trials; she failed to make the team. She was also the youngest competitor to swim at the 2001 Goodwill Games.

At the 2004 Athens Olympics, she was a member of the United States' gold medal winning 4x200m freestyle relay team that set a world record.

She also participated in the 2008 Fiji Swims 18km relay in Fiji.

In 2009, she set her first individual American record, breaking Natalie Coughlin's 200-yard freestyle record with a time of 1:41.53.

At the 2009 World Swimming Championships in Rome, Vollmer won two medals a silver and a bronze. In the 200-meter freestyle, Vollmer set an American record in the semifinals with a time of 1:55.29. In the final of the 200-meter freestyle, Vollmer placed third and her American record was broken by Allison Schmitt. In the 4x200m freestyle relay, Vollmer swam the lead-off leg in 1:55.29. The American team finished in second place behind China with a time of 7:42.56.

At the 2011 World Swimming Championships in Shanghai, Vollmer won a total of three medals, two golds and one silver. In her first event, the 4×100m freestyle relay, Vollmer won a silver medal with Natalie Coughlin, Jessica Hardy, and Missy Franklin. Vollmer won gold in the final with a time of 56.87. In the 4×100m medley relay, Vollmer won gold with Natalie Coughlin, Rebecca Soni, and Missy Franklin with a time of 3:52.36. Swimming the butterfly leg, Vollmer had a split of 55.74. The final time of 3:52.36 for the medley relay was the second-fastest effort of all time, just behind the Chinese owned world record of 3:52.19.

In London, she again broke her American record and set an Olympic record with a time of 56.25 in her 100m butterfly qualifying heat.