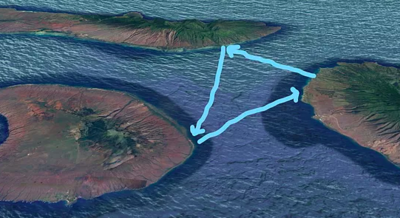 The triangle-shaped course of the Maui Nui Swim governed by the Kaiwi Channel Association between the Hawaiian islands of Maui, Molokai and Lanai

The Maui Nui Swim (or the Maui Nui Triangle Swim, the Maui Nui Crossings, the Maui Nui Channel Swim, or originally the 3 Islands Swim) is a non-stop three-way channel swim between the Hawaiian islands of Maui, Lanai and Molokai, swum in any order by either a relay or solo swimmer. There are innumerable starting and finishing points, courses and directions (clockwise or counterclockwise) that swimmers can take to complete this swim. Solo swims of the Maui Nui Swim are governed by the Kaiwi Channel Association.

Maui Nui was once a large landmass that consisted of the modern-day islands of Maui, Lanai, Molokai and Kahoolawe in Hawaii approximately 1.2 million years ago. These four islands comprise of Maui County in contemporary times.

Becca Mann's 2019 Maui Nui Swim was nominated for the 2019 World Open Water Swimming Performance of the Year award as follows: