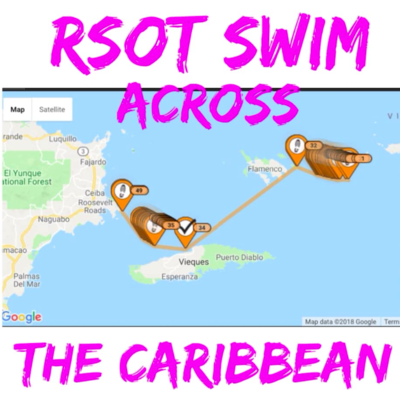 The 2018 RSOT Swim Across The Caribbean was a 80.4 km stage swim from St. John’s to St. Thomas to Vieques to Ceiba, Puerto Rico by Joel Matos Ortiz in May 2018

Vieques (Isla de Vieques) is an island–municipality of Puerto Rico in the northeastern Caribbean Sea, part of an island grouping sometimes known as the Spanish Virgin Islands. Vieques is part of the Commonwealth of Puerto Rico, and retains strong influences from 400 years of Spanish presence in the island.

Vieques lies about 8 miles (13 km) east of the Puerto Rican mainland, and measures about 21 miles (34 km) long by 4 miles (6 km) wide. Its one main town Isabel Segunda (sometimes written "Isabel II"), the administrative center on the northern side of the island.

The island's name is a Spanish spelling of an American Indian word (likely Taíno) said to mean "small island". It also has the nickname "Isla Nena", usually translated from the Spanish as "Little Girl Island", alluding to its perception as Puerto Rico's little sister. During the colonial period, the British name was "Crab Island".

Vieques is best known internationally as the site of a series of protests against the United States Navy's use of the island as a bombing range and testing ground, which led to the navy's departure in 2003. Today the former navy land is a national wildlife refuge, with numerous beaches that still retain the names given by the navy, including Red Beach, Blue Beach, Green Beach and others. The beaches are commonly listed among the top beaches in the Caribbean for their azure-colored waters and white sands.