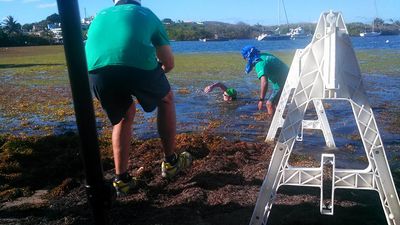 Isla Culebra (or Snake Island) is an island-municipality of Puerto Rico originally called Isla Pasaje and Isla de San Ildefonso. It is located approximately 17 miles (27 km) east of the Puerto Rican mainland, 12 miles (19 km) west of St. Thomas and 9 miles (14 km) north of Vieques. Culebra is spread over 5 wards and Culebra Pueblo (Dewey), the downtown area and the administrative center of the city. The island is also known as Isla Chiquita ("Little Island") and Última Virgen ("Last Virgin"), reflecting its position at the end of the Virgin islands archipelago). Residents of the island are known as Culebrenses.