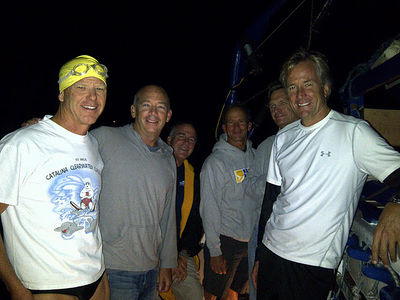 Dan Leonard was the captain of the Aquaboomers, a world record-setting Catalina Channel relay record comprised of himself, Tracy Edwards, Brad Magit, Bill Ireland, Bruce Thomas and Steve Lowe who crossed in 8 hours 8 minutes. Fellow SCAQ member Alicia Bartley was one of the kayakers. Their support team included two members of the Mighty Mermaids, Jenny Cook and Christie Plank Ciraulo.

They broke the previous record of the men's 50-59 year age-group of the Swell Guys, initially set on July 8, 2002 from Catalina to the mainland in 10 hours 35 minutes, comprising of Steve Dockstader, Donald Van Cleve, Chris Wagner, Bill Kehoe, Warren Haviland and Rich Henry.

Dan Leonard began competing in open water swimming 5 years ago when he started swimming for fitness. He was a competitive swimmer in high school but switched to rowing in college and was a member of the lightweight crew at the University of Pennsylvania. Leonard has competed in open water swimming races in the Southern California region and in Hawaii. He was Southern Pacific Masters Association male high point winner in 2010 and placed third in his age division in the Waikiki Roughwater Swim in 2011. He is also a competitive masters pool swimmer and specializes in breaststroke. He has been in the United States Top Ten and the World Top Ten rankings in breast stroke. He was also a member of the relay team that set the current world record in the Men 200+ age group in the 400 Freestyle Relay.