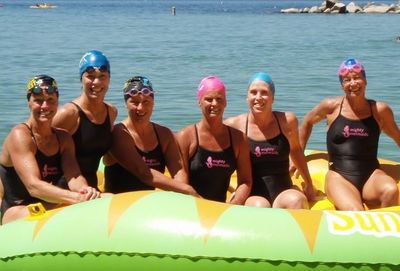 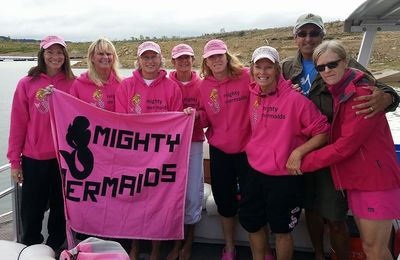 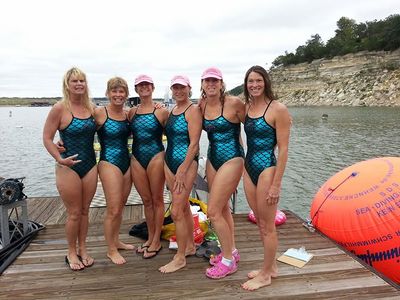 The Mighty Mermaids is the nickname of a fantastically fit female group of open water swimmers who have set records and won competitions from coast to coast.

Nancy (New Jersey) has swum along the Jersey shore since childhood. She has swum all over the world including an English Channel crossing in 2004, the 17.5-mile Ederle Swim in 2006, and across the Catalina Channel in 2008.

Lisa (Virginia) is a US Masters Swimming and 3-time world record holder with 159 USMS Top Ten swims with numerous open water swimming victories, including being the first woman to win the Navy SEAL reunion swim.

Jenny (Los Angeles) is a national and world record holder in the pool who is taking her considerable swimming talents to the open water from California to New York.

Karen (New Jersey) is a successful English Channel swimmer who several local open water swimming victories in between earning 132 USMS Top Ten positions and setting 9 world records and 19 world number one rankings. A breast cancer survivor, mother of triplets and an attorney, it is a wonder Karen has time to sleep.

Tracy (New Hampshire) is the widely-recognized administrator for USMS in addition to having consistently placed on the world's top ten lists.

Veronica (California) is a former world-class pool swimmer who won the 2011 and 2012 SPMS Open Water Series held in Southern California.