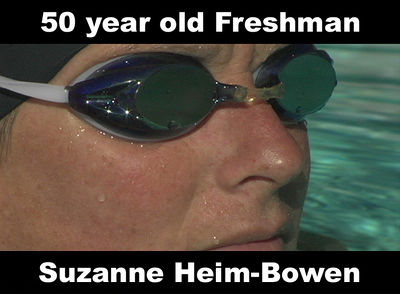 50 year old FRESHMAN Suzanne Heim-Bowen is an independent documentary film about Suzanne Heim-Bowen, an open water swimmer and inductee in the International Masters Swimming Hall of Fame. The swimming film was directed and produced by Deborah McDonald and it won the 2012 Best Sports / Outdoor Feature at the 2012 Indie Film Festival in Colorado Springs, Colorado and will be shown at the 2012 International Aquatic History Symposium & Film Festival in Ft. Lauderdale, Florida.

"Deborah captures the heart of Suzanne in this inspirational story. I know it will resonate with the Masters swimming community," Rob Butcher, Executive Director U.S. Masters Swimming

"Our sport has so many heroes, but it is rare that their story is put on film. Deborah captures what makes Suzanne a champion and one of those rare individuals who can push themselves beyond the imaginable," Steven Munatones, founder Open Water Swimming.