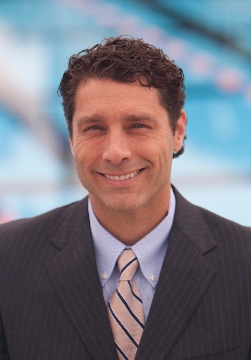 Rob Butcher is the President and Chief Executive Officer of Swim Across America as of 1 January 2016 and is formerly the Executive Director of U.S. Masters Swimming. Prior to joining USMS, Rob was the chief marketing officer for World Racing Group and prior to that, senior director of marketing for International Speedway Corporation.

Since June 2008, he has transitioned USMS from an all-volunteer, virtually run organization to one with a professional staff and a national headquarters. The USMS Board of Directors and USMS House of Delegates adopted a strategic and business plan that led to the establishment of the National Office in Sarasota, Florida, the rebranding of USMS, the redesign of usms.org, offering of new services such as our Masters coach certification program, hosting of the 2012 USMS Nationals in the Olympic Trials venue, establishment of Swimming Saves Lives Foundation, and development of an in-house member registration system.

Since 2008, USMS membership has increased from 44,000 to more than 58,000, and annual revenue has doubled to more than $2.5 million. In addition to management of the National Office staff, Butcher actively manages USMS partnerships with USA Swimming, USA Triathlon, American Swimming Coaches Association, College Swimming Coaches Association of America, International Swimming Hall of Fame, Swim Across America, and YMCA of the USA. Butcher is also on the National Swimming Pool Foundation board of directors and is a member of the Association of Chief Executives of Sport.

Butcher was a four-year varsity swimmer at Georgia Southern University, where he earned a bachelor’s of business administration in marketing and master of science degree in sports management. He also competed in the 2000 U.S. Olympic Swimming Trials at the age of 28. He has been a member of USMS since 1996.