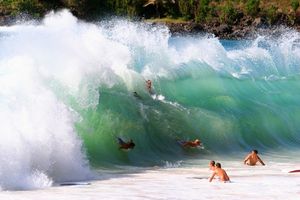 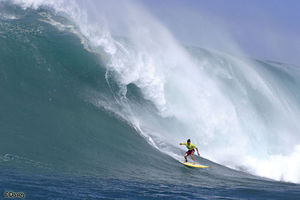 Waimea Bay is located in Haleiwa on the North Shore of O‘ahu in the Hawaiian Islands at the mouth of the Waimea River. Waimea Valley extends behind Waimea Bay. Waimea means "Red Water" in Hawaiian.

In winter, Waimea and other North Shore locations such as Pipeline and Sunset Beach host a number of surfing contests because of the large waves found here. These waves are created by winter storms in the North Pacific, and their arrival on O‘ahu's North Shore are typically forecast accurately several days in advance. In summer, Waimea typically has clear and calm water.

The surf break at Waimea Bay was significant in the development of big wave surfing. Larger surf at the bay went unridden for years until November 7, 1957 when a handful of surfers finally paddled out and rode the giant waves that break off the northern point of the bay. While the surf only breaks big several times a year, Waimea was the most prestigious big wave surf break in the world for decades. With the advent of tow-in surfing, more and more big wave breaks have been discovered that are far superior in quality to Waimea. However, the bay still holds a significant place even in today's world of big wave surfing.

The Quiksilver Big Wave Invitational in Memory of Eddie Aikau takes place in this point to honor the legendary surfer and the first lifeguard of the North Shore of Oahu. Since its inception in 1984, the tournament has only been held seven times, due to a precondition that there be waves at least 20 feet high at Waimea Bay. The most recent tournament was in December 2009, when waves in the bay reached 30 to 50 feet high.

On 28 January 1998, Hawaii issued its first ever "condition black" legally closing all North Shore beaches including Waimea Bay. The Quiksilver Big Wave Invitational in Memory of Eddie Aikau was canceled due to above average behemoth surf.

During the summer months, it is site of the North Shore Swim Series: