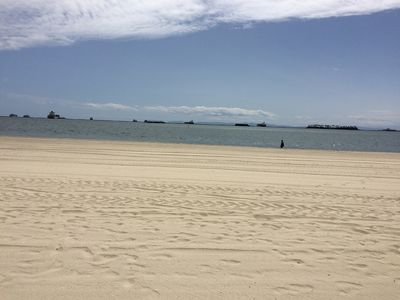 Sunset Beach is a 1.2 mile stretch of sandy beach located in North Orange County, California. It is a Huntington Beach, California beachfront community within Orange County. Santa Catalina Island and the coastal areas from Newport Beach to Long Beach and San Pedro can be seen from its shores. Sunset Beach features one of the widest beaches in southern California. Running parallel to the beach, from the north of town to the southern edge is the Green Belt, a bucolic 14 acre park on which residents walk their dogs and celebrate Mother's Day with the historic Sunset Beach Art Festival, sponsored by Las Damas. Southeast of Sunset Beach is Bolsa Chica State Beach. To the east is the bayfront community of Huntington Harbour (part of Huntington Beach), and roughly north is the Naval Weapons Station Seal Beach, and the Seal Beach National Wildlife Refuge.

Sunset Beach is a beach and a seaside town in Brunswick County, North Carolina with a population of 3,572 at the 2010 census. It is part of the Myrtle Beach metropolitan area. The seaside town of Sunset Beach had its start in 1955 when the land it occupies was bought by a property developer. Development began in earnest with the completion of a bridge connecting the beach island to the mainland in 1958.

It was named one of National Geographic Magazine's 21 Best Beaches in the World in 2019.

The Southern California Sunset Beach is one of the training locations of the Open Water Swim Club and the start of the OC Coast To Coast Boast, an 11-day stage swim along the entire Orange County coastline.