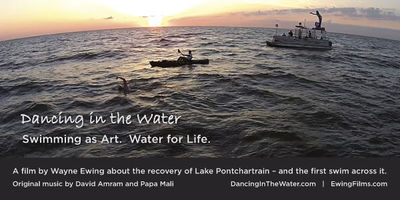 Dancing In The Water, a film about Lake Pontchartrain and Matthew Moseley's swim across the lake, that was nominated for the 2014 World Open Water Swimming Offering of the Year

Lake Pontchartrain is a brackish estuary located in southeastern Louisiana. It is the second-largest inland saltwater body of water in the United States and covers an area of 630 square miles (1,600 km2) with an average depth of 12 to 14 feet (3.7 to 4.3 m). Some shipping channels are kept deeper through dredging. It is roughly oval in shape, about 40 miles (64 km) from west to east and 24 miles (39 km) from south to north. In descending order of area, the lake is located in parts of St. Tammany, Orleans, Jefferson, St. John the Baptist, St. Charles, and Tangipahoa parishes. Lake Pontchartrain is named for Louis Phélypeaux, comte de Pontchartrain, the French Minister of the Marine, Chancellor of France and Controller-General of Finances during the reign of France's "Sun King," Louis XIV, for whom Louisiana is named.

Lake Pontchartrain is not a true lake but an estuary connected to the Gulf of Mexico via the Rigolets strait (known locally as "the Rigolets") and Chef Menteur Pass into Lake Borgne, another large lagoon, and therefore experiences small tidal changes. It receives fresh water from the Tangipahoa, Tchefuncte, Tickfaw, Amite, and Bogue Falaya rivers, and from Bayou Lacombe and Bayou Chinchuba. It is one of the largest wetlands along the Gulf Coast of North America.

Owing to past exploitation, the ecosystems of the lake are under stress. Marshes, for example, are turning to open water, and cypress swamps are being killed by salt water intrusion. There is also good news: Brown Pelicans and Bald Eagles, once scarce, are now a common sight along the shores. A team of experts assembled by The Nature Conservancy assessed the situation in 2004. New Orleans was established at a Native American portage between the Mississippi River and Lake Pontchartrain.

The Lake Pontchartrain Causeway was constructed in the 1950s and 1960s, connecting New Orleans (by way of Metairie) with Mandeville and bisecting the lake in a north-northeast line. At 24 miles (39 km), the Causeway is the second-longest bridge over a body of water in the world.

Swim Across the 'Train[edit]

Dancing In The Water is a documentary film created by Wayne Ewing about Matthew Moseley's swim across Lake Pontchartrain.

Swimming the Longest Bridge in the World[edit]