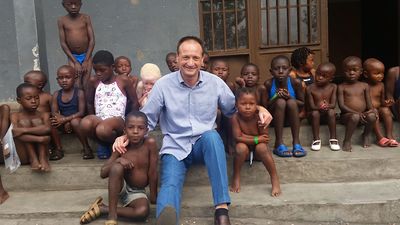 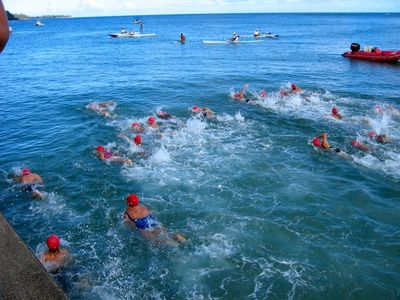 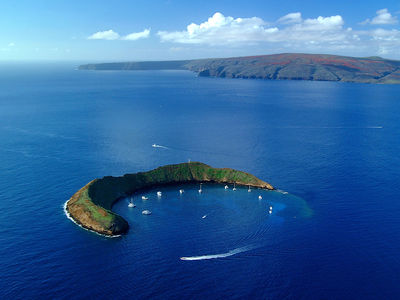 Molokini volcanic crater island with Maui in the background was the site of the Wailea Molokini Challenge, a charity swim for Best Buddies Hawaii headlined by Karen Gaffney 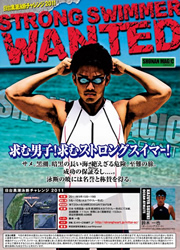 Poster for the Japan to Taiwan Ocean Swim Challenge, a charity swim 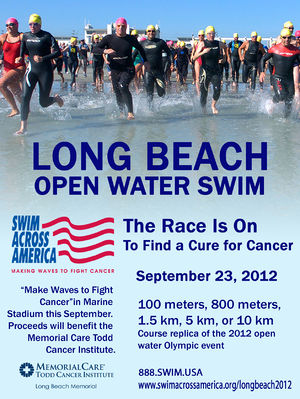 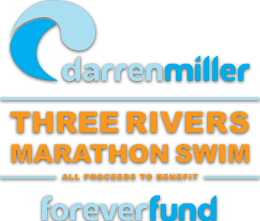 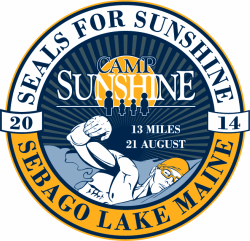 SEALs for Sunshine, a charity swim of 13 miles across Sebago Lake in Maine by 4 Navy SEALs on behalf of Camp Sunshine

noun - Charity swim is an open water swimming event, relay, stage swim or race with the primary goal of raising money, media attention and awareness for a cause, individual or non-profit organization, especially among individuals and non-traditional donors.

The Japan to Taiwan Ocean Swim Challenge raised nearly $100,000 for the victims of the tsunami with their relay swim.

Swimming to raise money and awareness of charity/”public interest” issues

Swimmers routinely swim for charity or the raise awareness for ”public interest” issues. Raising money for charity might be a few hundred for a local hospice or more than 10 million in the case of IMSHOF Honoree Maarten van der Weijden for cancer research. In almost all cases the motives and execution are pure and all involved win! However, in some situations the swimmer is sloppy in motive or execution and this diminishes the sport.

Here are some best practices for all – which might help going forward. Follow the advice below and avoid problems that others have experienced.

This is the easiest/cleanest mechanism – the swimmer (perhaps with close family support pays all the costs). The best practice it to direct any individuals/organizations to DIRECTLY send funds (with no refunds) to a charity or use a third party tool such as GoFundMe.com (which take a small % of the donations as a service fee). The swimmer never touches the donated funds – so can’t be accused of any impropriety. The swimmer, charity or “public interest” issue organization may decide to use a small percentage of the incoming funds to pay for custom caps, suits, shirts, towels, banners, etc.

A few suggestions. Pick a non-profit charity which can possibly allow those who donate (generally in the same country) to claim tax deductions. Pick a “public interest” issue that 99.99% will think is a good cause – example cancer screening awareness. This would, for example, help many of your Facebook friends to share your post. If you select a controversial issue – don’t be surprised if a few folks on social media may be rooting for you to fail. In some countries it is common to seek donation “pledges” and the swimmer then tries to collect cash after the swim. This can cause many problems: hard to collect, friends can fall out over aggression collection techniques, inability to give valid tax claim receipts and finally the swimmer ends up with a pile of cash (subject to accusation that they didn’t pay the charity quickly or fully).

Try and stick with a single charity or cause. If one charity receives 5,000 and the other one 50 – it will leave a bad feeling. Describe clearly that you plan, aspire or are scheduled to swim X. Make it clear that only a % of these swims are successful due to injury beforehand, weather preventing a start or injury/failure during the swim. This will help prevent a donor complaining that they gave 200 and the swimmer never got wet.

2. Seeking sponsors to cover some/all of the swim expenses

See 1 above for the same advice on the parallel fund/awareness raising. The easiest/cleanest mechanism is to get your company, a supermarket, sports store, etc. to fund 2,000 (example) towards the cost of your swim. Get your pilot to invoice them directly so the swimmer never touches the money and seek tax advice to make sure you aren’t taxed on this “benefit”. Make sure that the sponsor understands that you plan, aspire or are scheduled to swim X. Make it clear that only a % of these swims are successful due to injury beforehand, weather preventing a start or injury/failure during the swim. This will help prevent a donor complaining that they paid 1,000 (expenses) and the swimmer never got wet or didn’t make it.

Having a second sponsor can be complicated. Possibly they are competitors. Possibly one provides a service or product the other finds objectionable (example a Vaping product supplier). Then when one of the suppliers presents the swimmer at the last minute with a custom cap with JUST their name – it can get ugly.

Getting a sponsor to cover “all costs” sounds great but can lead to problems. Does it cover: 5 massage visits? The extra week in Dover if the English Channel swim is delayed due to weather? The cost of a hospital visit for a crew member after the swim? A replacement iPhone dropped overboard? 2 bottles of champagne afterwards?

Swim From The Heart Haifa