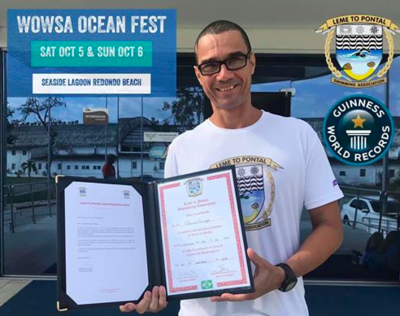 Rangel was nominated for the 2018 World Open Water Swimming Performance of the Year award for his record-setting Travessia do Leme ao Pontal swim in Brazil: Do Leme ao Pontal is a popular Brazilian song that inspired 2-time Olympian Luiz Lima to pioneer a coastal marathon swim in 2008 in Brazil. As the 36 km course becomes increasingly popular with Brazilian and international swimmers, Glauco Rangel wanted to attempt the swim that traverses the dramatic coast of Rio de Janeiro, passing landmarks including Sugar Loaf, Copacabana Beach, Christ the Redeemer and Ipanema Beach. After receiving the generous financial assistance from friends and fellow swimmers who wanted to back his dream, Rangel proved the investment in his goal was wise after he set a course record in 7 hours 13 minutes. For dealing with nocturnal navigation, constant ocean swells, and strong currents in the Atlantic Ocean, for enduring jellyfish stings, an increasingly intense tropical rain and an upset stomach during the swim, and for swimming very fast along a course made popular by music, the Travessia do Leme ao Pontal by Glauco Luise de Oliveira Rangel of Brazil is a worthy nominee for the 2018 World Open Water Swimming Performance of the Year.