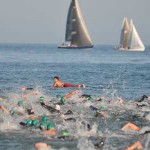 Semana Nautica in the ocean 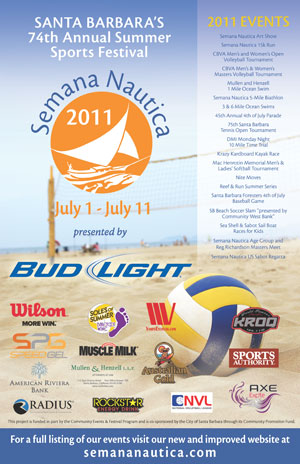 For more than half a century, Santa Barbara has celebrated the Semana Nautica Summer Sports Festival (Semana Nautica Ocean Swim) surrounding the 4th of July holiday. The festival originated in 1933 when the local populace challenged the crew of five U.S. Navy battleships, moored outside the harbor, to a series of contests along the beach. Dubbed Fleet Week, the resulting enthusiasm inspired the City Council to charter the event on a permanent basis the following year and change the name to Semana Nautica in honor of the town’s Spanish heritage. It is part of the Southern Pacific Masters Open Water Series held along the Southern California coast.

Australians Max Halson (57:10) and Luane Rowe (1:03:31) took the top honors in the Semana Nautica 3-mile Swim. Halson was in a lead group of four swimmers, which included former champion Alex Kostich around the final buoy. Halson noted that the sport is very popular in his native Australia, "A lot of big-time swimmers are celebrities. My goal is to compete in open water swimming at the 2016 Olympics in Brazil."

Rowe is a seasoned swimmer, having won the Waikiki Roughwater Swim three consecutive years, been on three straight winning women’s relay teams at the Maui Channel Swim and has won Australian races like the Cole Classic and Macquarie Big Swim with plans to do the English Channel in 2011.

The Jeff Ferrell Sportsman Award is part of the Semana Nautical Sports Festival that is given to those individuals who support and embody the spirit of Semana Nautica, usually through dedicated years of volunteerism, participation and/or support.