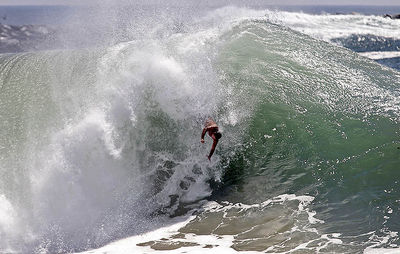 The Wedge at Newport Beach 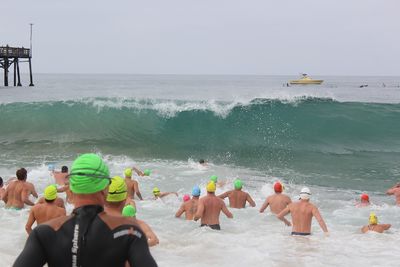 Newport Beach, incorporated in 1906, is an affluent American city in Orange County, California, 10 miles (16 km) south of downtown Santa Ana. The population was 85,287 at the 2010 census.

Newport Beach is also home to Newport Harbor and the famous Wedge and several open water swimming competitions including the Big Richard, Piers and Beers, Newport Pier-to-Pier Swim, and the Don Burns 1-mile Scholarship Swim. These races are part of the Southern Pacific Masters Open Water Series held along the Southern California coast:

The Wedge in Newport Beach

The Wedge is a world-famous surfing, body boarding and body surfing spot located at the extreme east end of the Balboa Peninsula in Newport Beach. During a south swell of the right size and direction, the Wedge can produce huge waves up to 30 feet (9.1 m) high. It is the start of the Big Richard, the longest beach run + ocean swim in the United States.

In addition, the beach at The Wedge is very steeply shaped sand, resulting in what is known as shore break (see below) and a very strong backwash which often drags people back into the surf. The backwash itself frequently creates another, outgoing wave, which can hit an incoming wave or surfer with enormous force. With the combined effect of the unpredictability of where the incoming waves will break, and the strength of the backwash, the resulting wave action can be highly unpredictable and therefore both exciting as well as very dangerous. Of course, it is this combination of danger which draws so many to surf The Wedge. Inexperienced swimmers or surfers should always use caution when considering swimming in the surf near The Wedge.