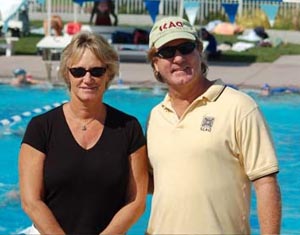 noun - SCAQ or the Southern California Aquatic Masters Swim Club is the largest masters swimming team in the United States. SCAQ offers 65 adult swimming workouts at 7 different facilities each week throughout the Los Angeles area in addition to a variety of ocean swimming clinics and workouts along beaches in Los Angeles County.

Evans was an Olympic medalist in the 100m butterfly at the 1976 Montreal Olympic Games. Evans was born in South America to Canadian parents. Clay moved to Huntington Beach, California at 15 and was recruited by UCLA on a swimming and water polo scholarship. He was a four year All-American and NCAA finalist in the 100 butterfly and an Olympic silver medallist at the Montreal Olympics. Clay has broken over 40 Masters National and World records during his career.