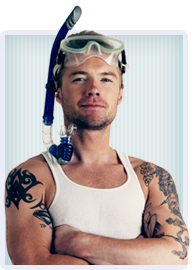 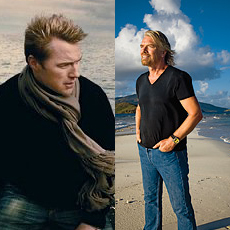 Ronan Keating (born 3 March 1977) is an Irish recording artist, singer-songwriter, musician, philanthropist and budding open water swimmer who participated in The Swim that was nominated for the 2011 World Open Water Swimming Performance of the Year.

Keating debuted on the professional music scene alongside Keith Duffy, Mikey Graham, Shane Lynch and Stephen Gately in 1994 as the lead singer of Boyzone. His solo career started in 1999 and resulted in 9 studio albums. Keating gained worldwide attention when his single When You Say Nothing at All was featured in the film Notting Hill and peaked at number one in several countries. As a solo artist, Keating has sold over 22 million records worldwide. Along with Boyzone, Keating has sold over 40 million records worldwide, and in Australia he is best known as a judge on The X Factor.

Keating has worked as a charity campaigner most notably for the Marie Keating Foundation, a foundation that raises awareness for breast cancer. It is named after his mother, who died of the disease.

In September 2011, he is set to swim the Irish sea in a 90-kilometer stretch from Dublin to Holyhead to raise money for cancer charities and set a new Guinness World Record for open water swimming when he takes part in the relay with a 10-member team which will also include business tycoon Sir Richard Branson.

They aim to raise $1.6 million for Cancer Research Britain and the Marie Keating Foundation when they tackle the feat in September.

Keating was born the youngest of five children. Keating grew up on the Northside of Dublin and Co Meath. Keating was a track and field athlete and represented Ireland on several tournaments, winning the All Ireland under-13 200m title.

Keating joined the band Boyzone on 1993. Keating, along with Keith Duffy, Richard Rock, Shane Lynch and Stephen Gately performed in various clubs and pubs before being signed by PolyGram in 1994 and released a cover version of Working My Way Back to You by The Four Seasons. The group also released a cover version of Love Me for a Reason which would peak on several charts. In 1998, his mother died at the age of 54 from breast cancer, resulting in the establishment of the Marie Keating Foundation, a charity to raise breast cancer awareness. Keating married Yvonne Connolly in April 1998 and together, the couple have three children: Jack, Marie and Ali.

In 1999, while still a member of Boyzone, Keating recorded a version of "When You Say Nothing At All" for the motion picture Notting Hill. The single peaked at number one in the United Kingdom charts, leading to a successful solo career. Keating released his debut solo album entitled Ronan in 2000, peaking at number one in the UK Albums Chart. It sold over 750,000 copies and became one of the top selling albums of the year in the United Kingdom. It debuted at number one on the UK Albums Chart, and have been certified four-times platinum by the British Phonographic Industry for sales of 1.2 million copies. In the singer's native Ireland, the album debuted at number two. The album also became a commercial success in other European countries, where it charted within the top ten of eight countries.

The album produced four UK and Irish top-ten singles: When You Say Nothing at All, Life Is a Rollercoaster, The Way You Make Me Feel, and Lovin' Each Day, the latter of which was featured on the re-release edition of the album, and later on Keating's second album, Destination (2002).

After the successful debut album Ronan, Keating continued on with his solo career and since has released four more studio albums: Destination (2002), Turn It On (2003), 10 Years of Hits (2004) and Bring You Home (2006), four of which peaked at number one in the UK Albums Chart. Keating collaborated with several major stars, including Elton John, Lulu, LeAnn Rimes and the Bee Gees, for these albums.

Keating and Paul Brady co-wrote the 2001 hit single "The Long Goodbye", one of Keating's most loved hits amongst fans. Keating and Brady won the "BMI European song-writing award" for the single. In 2007, Keating was listed in the Guinness Book of Records for being the only artist ever to have 30 consecutive top 10 singles in the UK chart, beating the likes of Elvis Presley. Keating also embarked on two world tours, won the Ivor Novello and BMI songwriting awards, released an autobiography, had a role as ambassador for Christian Aid and earned sales in excess of 22 million albums worldwide. In 2007 he released 2 fragrances,the range consists of a female fragrance, Hope By Ronan, which is based upon musk and amber scents and a male scent, Believe by Ronan, based on Sicilian Lemon, Lavender and Clary Sage smells. All proceeds go to the Marie Keating foundation.

Keating performed at the 2006 FIFA World Cup opening party at the Brandenburg Gate in Berlin, Germany, in front of an audience of nearly 250,000 people, and posed nude for Cosmopolitan magazine's 10 Years of Naked Centrefolds. On May 9, 2007, Keating became the first international number-one selling foreign artist to perform a concert in Phnom Penh, Cambodia. Keating also performed at the Olympic Stadium Indoor Arena. Keating has dueted with Elton John at Madison Garden in New York and has sung for the Pope twice and performed for Prince Charles at the Prince's Trust 30th birthday, which took place at the Tower of London. He performed on stage for the Swedish Royal family at Crown Princess Victoria's birthday celebrations, and at the opening ceremony of the 19th European Athletics Championships in Gothenburg.

In 2007, Keating confirmed that Boyzone would reunite for a special appearance on the BBC's annual fundraiser Children in Need, performing a medley of hits, although had not yet commented on the possibility of a new tour or album. Soon, the Boyzone went on a 29-date tour.

In 2009 Keating co-wrote the song Believe Again sung by Niels Brinck, who won the Dansk Melodi Grand Prix and represented Denmark in the Eurovision Song Contest 2009 in Moscow where it qualified for the final. Following the success of Ronan Keating's album Songs For My Mother, he has recorded another entitled Winter Songs. Keating pulled together eleven songs that evoked memories of winter and Christmas for him.

He joined Boyzone on their tour of the UK and Ireland during February and March 2011 with a 21 date tour of the Ireland and UK with their arena-based Brother Tour. Ronan Keating has announced that Boyzone are recording and will release a new album towards the end of 2011.

In 2005, shortly after joining Christian Aid and the Trade Justice Campaign in 2004, Keating went to Rome where he was appointed as a UN Goodwill Ambassador via the Food and Agricultural Organisation.

In 2008, Keating ran in the London Marathon to raise money for Cancer Research, with a personal best time of 3:59. He has also walked the length of Ireland twice, each time raising money for the Marie Keating Foundation, now linked to Cancer Research in the UK. Each year the foundation holds charity balls and various events, raising funds to keep their mobile units on the road.

In 2009, Keating climbed Mount Kilimanjaro to raise money for Comic Relief and received a Special Achievement Award from Cancer Research UK - he was singled out for his work with them since 2006. He, along with the Marie Keating Charity, has helped to raise over £1.7 million for the UK charity. This money is used to fund three special mobile units which raise awareness throughout the UK.

In 2011, he is set to swim the Irish sea 90K stretch from Dublin]] to Holyhead to raise money for cancer charities and set a new Guinness World Record for open water swimming when he takes part in the relay with a 10-member team which will also include business tycoon Sir Richard Branson. They aim to raise $1.6 million for Cancer Research Britain and the Marie Keating Foundation when they tackle the feat in September.

Over the years he has won Smash Hits Best Solo Male. He was given a tree in London's Hyde Park for performing for The Prince's Trust. He also has a World Music Award for the best selling Irish artist.

In 2009, Keating guest co-hosted The Morning Show in Australia alongside Kylie Gillies while the show's regular male co-host Larry Emdur was on holiday. In addition, he has stood in for Steve Wright (DJ) on his Sunday Love Songs on BBC Radio 2.

Keating was invited to take part in an off-road race to find "the fastest off-road celebrity", along with newsreader Kate Silverton, Rugby player Matt Dawson, and Clarkson.

Keating is a judge on the Australian version of The X Factor (Australia) on the Seven Network in 2010. Season one has him mentoring the over 25's category. His fellow Boyzone bandmembers helped him in the judges' house selection of the contest. He was the winning mentor for the 2010 Season; his over 25 artist Altiyan Childs won the show.

He appeared as a guest on episode 7, series 5 of Celebrity Juice along with Kimberley Walsh and Chipmunk (rapper).

Ronan is shooting his first movie in Australia. It is a romantic musical comedy called "Goddess", his co-star is British Actress Laura Michelle Kelly. The film's being directed by Mark Lamprell who also directed 'Babe - Pig in the city' and is due for release in 2012.

Keating married model Yvonne Connolly in April 1998 and together, the couple have three children.