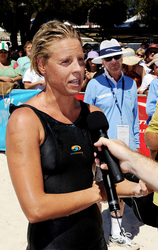 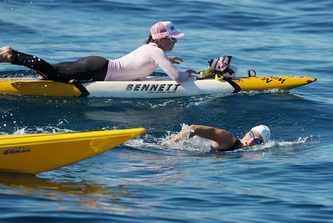 I was first introduced to water at a very young age. With growing up on a farm, I was priviledged and lucky enough to have a pool in my backyard. After trying out a number of sports - gymnastics, athletics just to name a few. I found my love for the water. At age 10 I joined my first swimming squad. It was there where an eight year journey began. I started off swimming 2 times a week and this gradually increased to 10. Throughout the 8 years I swam in numerous pool events in both New Zealand and occasionally in Australia.

Unfortunately at the age of 18, I contracted Chronic Fatigue Syndrome and it saw the end of my swimming career (temporarily). Upon moving to Syndey in 2007 I joined the local surf club - North Bondi. This introduced me to Ocean Swimming. I discovered that my passion for swimming was back. I jumped in and did the first ocean swim of the season and was surprised by how much I enjoyed it. I continued to swim the rest of the season on very little swimming. It was then that I decided it was time to give Ocean Swimming a really good go and so I jumped back in the pool at the beginning of Winter 2008 and I haven't looked back since.

During 2008 I joined the North Sydney Masters Swimming club and re-ignitied my passion for racing. It was then that I decided that I would participate in the 2009 World Masters Games in Sydney.

The beginning of 2009 saw me participate in the Rottnest Channel Swim as part of a team and this is where my passion for long distance open water swimming began. It was a memorable experience and I thank the guys who took on as part of their team at the last minute. Following on from this swim there were a number of challenges to complete the swim solo.

After a successful campaign during the World Masters Games in 2009 I re-set my goals to focus on the open water season and it was then I confirmed my participation in the Rottnest Channel Swim as a solo swimmer.

2010 saw me take on the Rottnest Channel as a solo competitor.

Winning my first marathon swimming event in early 2010 (www.rottnestchannelswim.com.au) kick started a new sporting passion. Since then I have swum between Sydney Harbour Bridge and Manly Wharf Bar, Coogee Beach and Bondi Beach, and throughout many beaches around Sydney. I have also swum to raise money for charity (Black Dog Institute & Centenary Institute Medical Research Foundation), to raise awareness for important causes/research. I am currently looking to compete in Fiji in 2010 and Rottnest Channel Swim in 2011.