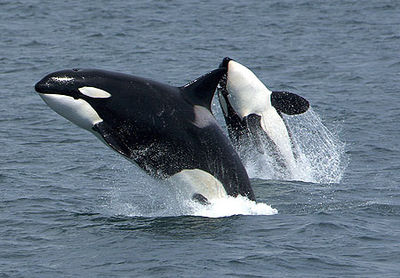 noun - Orcas (commonly referred to as killer whales or Orcinus orca) are toothed whales belonging to the oceanic dolphin family. Orcas are found in all oceans from the frigid Arctic and Antarctic regions to tropical seas. Orcas have a diverse diet, although some feed exclusively on fish, while others hunt marine mammals such as sea lions, seals, walruses and even large whales. They are regarded as apex predators, lacking natural predators and preying on even large sharks.

Orcas are highly social; some populations are composed of matrilineal family groups which are the most stable of any animal species. Their sophisticated hunting techniques and vocal behaviors, which are often specific to a particular group and passed across generations, have been described as manifestations of culture.

Orcas are not considered a real threat to humans, although there have been cases of captives killing or injuring their handlers at marine theme parks and a small number of documented cases of wild orcas attacking people. None of the recorded attacks have been fatal. There have been about two dozen cases of orcas attacking humans since the 1970s, almost exclusively perpetrated by captive animals. Experts are divided as to whether the injuries and deaths caused by captive killer whales have been accidents or deliberate attempts to cause harm.

However, orcas are powerful predators capable of dispatching prey much larger than humans, such as a leopard seal and Great white shark. They have also been recorded preying on usually terrestrial species such as moose swimming between islands.

English-speaking scientists occasionally use the term killer whale, although the term orca is increasingly used. Since the 1960s, orca has steadily grown in popularity; both names are now used. The term orca is preferred by some to avoid the negative connotations of "killer", and because, being part of the family Delphinidae, the species is more closely related to other dolphins than to whales.

These are the most commonly sighted of the three populations in the coastal waters of the northeast Pacific. Residents' diet consists primarily of fish and sometimes squid, and they live in complex and cohesive family groups called pods. Female residents characteristically have a rounded dorsal fin tip that terminates in a sharp corner. They visit the same areas consistently. British Columbia and Washington Southern Resident populations are amongst the most-intensively studied marine mammals. Researchers have identified and named over 300 killer whales over the past 30 years, although only 85 whales live in the three Southern Resident pods, J, K, and L.

The diet of these whales consists almost exclusively of marine mammals; they do not eat fish. Transients generally travel in small groups, usually of two to six animals, and have less persistent family bonds than residents. Transients vocalize in less variable and less complex dialects. Female transients are characterized by more triangular and pointed dorsal fins than those of residents. The gray or white area around the dorsal fin, known as the "saddle patch", often contains some black coloring in residents. However, the saddle patches of transients are solid and uniformly gray. Transients roam widely along the coast; some individuals have been sighted in both southern Alaska and California. Because of their feeding habits and summer habitat, transient whales are a concern in Salish Sea open water swimming.

A third population of orcas in the northeast Pacific was discovered in 1988, when a humpback whale researcher observed them in open water. As their name suggests, they travel far from shore and feed primarily on schooling fish. However, because of the large, scarred and nicked dorsal fins resembling those of mammal-hunting transients, they may also eat mammals and sharks. They have mostly been encountered off the west coast of Vancouver Island and near the Queen Charlotte Islands. Offshore orcas typically congregate in groups of 20–75, with occasional sightings of larger groups of up to 200. Currently, little is known about their habits, but they are genetically distinct from residents and transients. Offshore orcas appear to be smaller than the others, and females are characterized by dorsal fin tips that are continuously rounded.

Orcas hunt varied prey. Different populations/species tend to specialize and some can have a dramatic impact on certain preyed species. For example, some populations in the Norwegian and Greenland sea specialize in herring and follow that fish's autumnal migration to the Norwegian coast. Other populations prey on seals. Salmon account for 96% of northeast Pacific residents' diet. 65% of them are large, fatty Chinook. Chum salmon are also eaten, but smaller sockeye and pink salmon are not a significant food item. Depletion of specific prey species in an area is therefore cause for concern for local populations, despite the high diversity of prey. On average, a killer whale eats 227 kilograms (500 lb) each day.

Because some orcas prey on large whales and sharks, they are considered to be apex predators. They are sometimes called the wolves of the sea, because they hunt in groups like wolf packs.

Fish-eating orcas prey on around 30 species of fish, particularly Chinook, salmon, herring, and tuna. In New Zealand, rays are killer whales' most frequent prey, and they have also been observed hunting sharks (particularly makos, threshers and smooth hammerheads). Squid and sea turtles are also taken.

Orcas can induce tonic immobility in sharks and rays by holding them upside down, rendering them helpless and incapable of injuring the whale. Some sharks suffocate within about 15 minutes while the whale holds them still, because these sharks need to move to breathe. In one incident filmed near the Farallon Islands, a female killed a 3–4-metre (9.8–13 ft) long great white shark, apparently after swimming with it upside-down in her mouth and inducing tonic immobility in it. She and another pod member ate the shark's liver and allowed the rest of the carcass to sink.

Orcas are very sophisticated and effective predators. Twenty-two cetacean species have been recorded as their prey, from examining either stomach contents, scarring on the prey's body, or feeding activity. Groups even attack larger cetaceans such as minke whales, gray whales, and rarely sperm whales or blue whales.