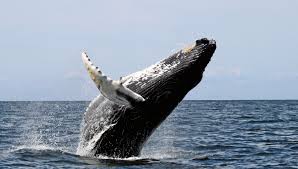 noun - Whale is the common name for various marine mammals of the order Cetacea. The term whale sometimes refers to all cetaceans, but more often it excludes dolphins and porpoises, which belong to the suborder Odontoceti (toothed whales). This suborder also includes humpback whales, sperm whales, killer whales, pilot whales, orcas, and beluga whales. The other Cetacean suborder, Mysticeti (baleen whales), comprises filter feeders that eat small organisms caught by straining seawater through a comblike structure found in the mouth called baleen. This suborder includes the blue whale, the humpback whale, the bowhead whale and the minke whale. All Cetacea have forelimbs modified as fins, a tail with horizontal flukes, and nasal openings (blowholes) on top of the head.

Whales collectively inhabit all the world's oceans and number in the millions, with annual population growth rate estimates for various species ranging from 3% to 13%. For centuries, whales have been hunted for meat and as a source of raw materials. By the middle of the 20th century, industrial whaling had left many species seriously endangered, leading to the end of whaling in all but a few countries.