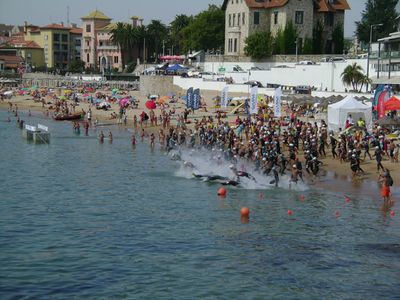 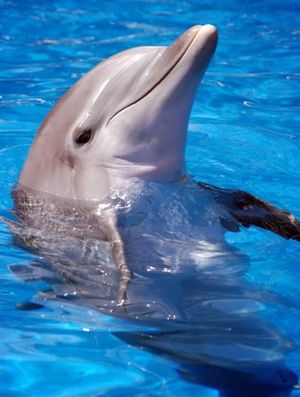 verb - To dolphin is to perform the act of dolphining in the shallow water of an open body of water. To dolphin is to dive forward hands first into an open body of water, angle down to the bottom, press against the bottom to begin coming up, and dive up and over the water again. In heavy surf conditions, dolphining often includes a deep dive under the waves while grabbing the sandy bottom to get under a crashing wave.

A flat dolphin dive is used by open water swimmers and triathletes to start or finish a race while moving through shallow waters.

noun - Dolphin are any of nearly 40 species of small marine toothed whales, living in either salt or fresh water. There are almost forty species of dolphin in 17 genera. They vary in size from 1.2 m (4 ft) and 40 kg (90 lb) (Maui's dolphin), up to 9.5 m (30 ft) and 10 tonnes (9.8 long tons; 11 short tons) (the Orca or Killer Whale). The cetaceans are found worldwide, mostly in the shallower seas of the continental shelves, and are carnivores, eating mostly fish and squid. The family Delphinidae is the largest in the Cetacean order, and evolved relatively recently, about ten million years ago, during the Miocene. Dolphins are among the most intelligent animals, and their often friendly appearance and seemingly playful attitude have made them popular in human culture. They travel in pods.

The dolphins came swimming around the pack of swimmers during the race.

verb - To jump over the water surface in the shallow areas of the open water at the start and finish of an open water swim.

The triathletes will dolphin quickly at the start.

Gerry Rodrigues practices dolphining in a shallow pool, measuring his velocity with SwiMetrics: