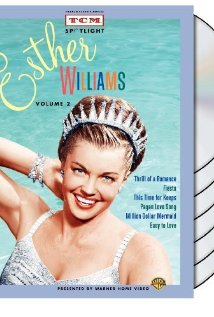 Easy to Love is a swimming movie and a 1953 musical film directed by Charles Walters. It stars Esther Williams and Van Johnson.

Ray Lloyd runs a successful Cypress Gardens water show, but star attraction Julie Hallerton is overworked and underpaid. She fibs about pretending to marry her aquatic partner Hank, but is persuaded by Ray to accompany him to New York instead. Julie's hired to pose for a magazine lipstick ad when handsome singer Barry Gordon takes the place of a male model and kisses her instead. Barry offers to introduce Julie to a promoter who will pay and treat her better than Ray does. When they return to Florida, a jealous Hank tells off Ray for not realizing how Julie truly feels. Her roommate Nancy whacks her accidentally with a water ski, knocking Julie cold. All three men in her life rush to her side, and it appears Barry's going to win her. At the last moment, Ray realizes he's in love with Julie, and vice versa. Barry quickly turns his attention to another bathing beauty while Nancy reveals a romantic interest in Hank.