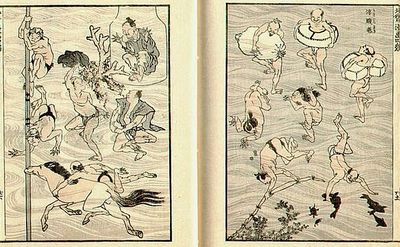 noun - Samurai (Japanese: bushi) were the military nobility of medieval and early-modern Japan. By the end of the 12th century, samurai became almost entirely synonymous with bushi, and the word was closely associated with the middle and upper echelons of the warrior class. The samurai followed a set of rules that came to be known as bushidō.

The Japanese samurai practiced suijutsu (水術 in Japanese) or suieijutsu, the ancient Japanese martial art of combative swimming. It is described as one of the 18 martial arts.

They also practiced shinden ryu (marathon swimming), kankai ryu (ocean swimming), suifu ryu (river swimming or rapids swimming), as well as other methods that were based on the topography and waterways (e.g., coastline or mountain areas). For example, if the samurai had to fight while wearing armor, they would study the kobori ryu (combative swimming) where the samurai would eggbeater (tread water) while keeping their upper body above water to fight with swords, fire arrows or guns while in or crossing a river.