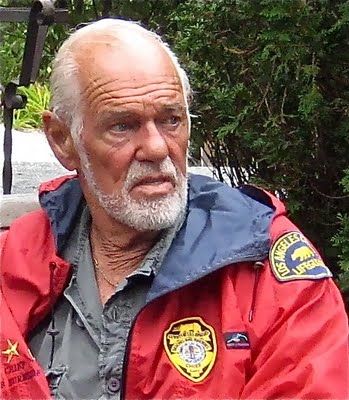 Bob Burnside, recipient of the Paragon Awards for Water Safety

Robert "Bob" Burnside (born 20 May 20, 1932 – died 10 December 2019) was s a waterman and an ocean lifeguard since 1951 who was appointed the first president of the “Surf Lifesaving Association” (Surf Life Saving Association of America) in 1964 which later became known as the United States Lifesaving Association (or USLA). In 1965, he was appointed president of the National Surf Life Saving Association. In 1967, he developed the revolutionary plastic “Burnside Rescue Can”, now a standard for lifeguards worldwide and iconic symbol of beach lifeguarding. He was a champion swimmer who introduced the Malibu balsa surfboard to Australia.

He is the 2014 recipient of the 2014 Paragon Awards for Water Safety and is the retired Los Angeles County Chief Lifeguard. He wrote the History of Junior Lifeguarding.

He was the Grand Champion in World Body Surfing Championships in 1989. For 13 consecutive years, he was the winner in his age division. He has been a master’s division national champion twelve times at the United States Lifesaving Association National Lifeguard Championships in iron man, swim, rescue board paddle, and rescue race events. He has been a national master’s division swim champion, a National Dorymen's Association Champion, and winner of the Master Intermountain Downhill championship.

He was the co-designer and produced the revolutionary plastic “Burnside Rescue Can” which is now a standard for lifeguards worldwide and an iconic prop for productions like Baywatch. It was developed when a new rotational molding process became available. It replaced the metal rescue can, which though serviceable, caused many lifeguard injuries.

He was hired as an ocean lifeguard by Los Angeles County in 1951. When a representative of Surf Life Saving Australia met with Los Angeles County lifeguard leaders, Burnside was appointed to become the president of what was to be called the Surf Life Saving Association of America, created solely to compete in Australia at the first international lifesaving competition to be held there in conjunction with the 1956 Olympics. He was a member of the team that travelled to Australia to compete. The team brought Malibu balsa surfboards, which revolutionized surfing in Australia, where up to that time Australians were using boards made of hollow construction mahogany plywood. The team also brought aluminum rescue buoys and the Peterson rescue tube, which were quickly adopted by Australian lifeguards who had previously depended solely on the belt and reel. The team of American lifeguards, who had never competed in Australian lifesaving competition. Burnside placed third in the International belt race at Melbourne, Torquay.

In 1963, he invited lifeguards from various lifeguard agencies in Southern California with the concept of creating a true national association of professional ocean lifeguards. The various delegates agreed. In 1964, the Surf Life Saving Association of America was formally created as a nonprofit organization of professional beach lifeguards. Burnside was elected president and served in that capacity for four years. The organization changed its name twice and is now known as the United States Lifesaving Association.

In 1967, he served as manager of a new competition team which toured and competed in Australian and New Zealand. The following year, 1968, he toured the East Coast of the USA in an effort to promote membership, broadening interest to help move the organization toward a true national base.

He was the founder of Club Tortuga, a USLA-approved Mexican water safety development project. As part of this project the first Spanish beach lifeguard training manual was developed primarily as a translation of the USLA manual. As well, he organized the development of a video, depicting lifeguard issues throughout Mexico, and coordinated onsite training and political support for Mexican lifeguards. Those efforts established Mexico's first government lifeguard employees who now serve under the States Fire Division Chief.