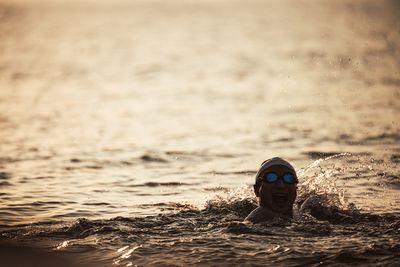 He was nominated for the 2019 World Open Water Swimming Man of the Year award with the following nomination:


Alex Fong Lik-sun of Hong Kong completely took off swimming for 15 years after he represented his nation in the 200m backstroke and 400m IM at the 2000 Sydney Olympics. He transitioned his considerable talents - buoyed by an abundance of charisma - to dryland activities. Named one of the Ten Outstanding Young Persons in Hong Kong, he established a swimming school with the mission to Swim with Integrity and Meaning. After winning the 15 km Cold Half Extreme Marathon Swim, he later smashed the existing circumnavigation swim record around Hong Kong en route to becoming the 4th swimmer to complete the 45 km HK360 course in 10 hours 43 minutes. For returning to the swimming community with victories and records while inspiring many others to swim, for raising $4.5 million in donations in order to provide clean water to 450,000 Chinese citizens, and for diligently and tirelessly working as a role model for the next generation of swimmers and non-swimmers alike, Alex Fong Lik-sun is a worthy nominee for the 2019 World Open Water Swimming Man of the Year.