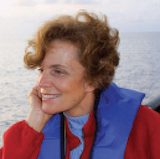 Sylvia Earle, an OceanElders and aquanaut

Sylvia Alice Earle (born 30 August 1935 in Gibbstown, New Jersey) is an American oceanographer and ocean advocate. She was chief scientist for the U.S. National Oceanic and Atmospheric Administration from 1990–1992. She is a National Geographic explorer-in-residence, sometimes called "Her Deepness" or "The Sturgeon General". She is one of the OceanElders and was named a Living Legend by the Library of Congress and the first Hero for the Planet by Time Magazine.

Earle received a B.S. degree from Florida State University (1955), M.S. (1956) and Ph.D. (1966) from Duke University. She was Curator of Phycology at the California Academy of Sciences (1979–1986) and a Research Associate at the University of California, Berkeley (1969–1981), Radcliffe Institute Scholar (1967–1969) and Research Fellow or Associate at Harvard University (1967–1981). She led the first team of women aquanauts during the Tektite Project in 1970. In 1979, she made an open-ocean JIM suit dive, setting a women's depth record of 1250 feet (381m); she also holds the women's record for a solo dive in a deep submersible (3280 feet, 1000m). From 1980 to 1984 she served on NACOA (the National Advisory Committee on Oceans and Atmosphere). In 1985 she founded Deep Ocean Engineering along with her husband, engineer and submersible designer Graham Hawkes, to design, operate, support, and consult on piloted and robotic sub sea systems. In 1987 The Deep Ocean Engineering team designed and built the Deep Rover research submarine, which operates down to 1000 meters. She left the company in 1990 to accept an appointment as the Chief Scientist for NOAA (National Oceanic and Atmospheric Administration).

Today, Earle serves as an explorer in residence at the National Geographic Society. In 2011, she received an honorary doctorate from Smith College, and delivered the commencement address at Warren Wilson College.

Earle has led more than 60 expeditions worldwide involving in excess of 7000 hours underwater in connection with her research. From 1998 to 2002 she led the Sustainable Seas Expeditions, a five year program to study the United States National Marine Sanctuary sponsored by the National Geographic Society and funded by the Goldman Foundation. An expert on the impact of oil spills, she was called upon to lead several research trips during the Gulf War and following the spills of the ships, Exxon Valdez and Mega Borg.

Sylvia Earle is the author of more than 125 publications concerning marine science and technology including the books Exploring the Deep Frontier, Sea Change (1995), Wild Ocean: America's Parks Under the Sea (1999) and The Atlas of the Ocean (2001), she has participated in numerous television productions and given scientific, technical, and general interest lectures in more than 60 countries. Children's books that she has written include Coral Reefs, Hello Fish, Sea Critters, and Dive!

Earle was named Time magazine's first "hero for the planet" in 1998. She is a Knight in the Netherlands Order of the Golden Ark.

She was instrumental in adding a new feature of displaying oceans in version 5.0 of Google Earth.

In 2009, Earle won the TED Prize. This honor granted her the resources to start Mission Blue.

The project has established Hope Spots- a network of marine protected areas established to heal and safeguard specified areas of the ocean. These areas will not only provide a platform for research and observation, but also a resource for educating the public about marine issues and their effects on humans.

In April 2010, TED and Sylvia Earle together held the Mission Blue Voyage on the National Geographic Endeavor on the Galapagos Islands. More than 100 speakers, guests, and celebrities gathered to direct public attention to the needs of our oceans and the work Mission Blue is doing.