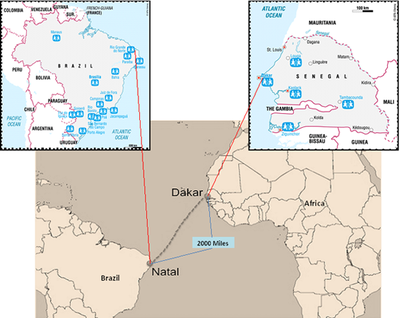 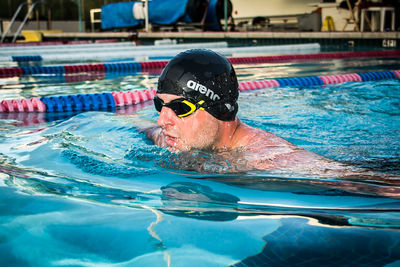 noun - Swim the Big Blue (or Swimming The Atlantic: 2,000 Miles Africa To Brazil was an attempt by Ben Hooper to swim across the Atlantic Ocean, 1,731 miles (2,786 km) from Dakar Harbour in Senegal, Africa to Natal in northeast Brazil from November to December 2016. Hooper departed in November from Dakar Harbour, Senegal and swam 87 miles over 33 days until he abandoned the swim due to conditions in December.

Swim The Big Blue is a course from Dakar, Senegal to Natal, Northern Brazil across the Atlantic Ocean.

Ben Hooper swam a total of 87 miles over 33 days before abandoning the attempt.

Ben Hooper (born in London) is a British open water swimmer who served with the military, police and worked within mental health and psychology. He also writes fiction and is a 2* AIDA freediver and Open Water PADI scuba diver. During his teen years, Hooper competed in long distance swims for charity and recreationally trained in the pool, running and golf being his other passions. He also did middle distance running and triathlon competition.