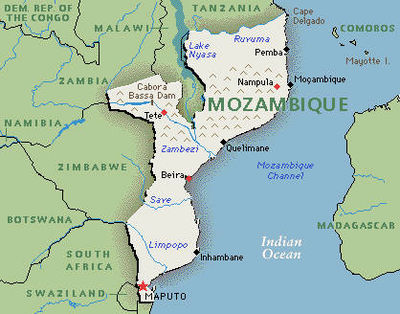 Mozambique Channel between Mozambique and Madagascar

The Mozambique Channel is a portion of the Indian Ocean located between Madagascar and Mozambique. It was a World War II clashpoint during the Battle of Madagascar. The channel is approximately 460 km (286 miles) across at its narrowest point between Angoche, Mozambique, and Tambohorano, Madagascar. The channel reaches a depth of 3,292 m (10,800 feet) about 230 km (143 mi) off the coast of Mozambique. A warm current flows in a southward direction in the channel, leading into the Agulhas Current off the east coast of South Africa. It is around 1000 miles (1600 km) long and the width of it varies from 250–600 miles (400–950 km).

Thane Williams and Jonno Proudfoot each swam simultaneously across the Mozambique Channel from 28 February to 24 March 2014, a total of 458 km in a 155-hour stage swim.