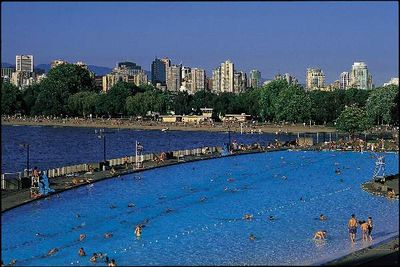 Kitsilano Beach, or Kits Beach as it is known locally, is one of the most popular beaches in Vancouver, Canada especially in the warm summer months. Located at the north edge of the Kitsilano neighbourhood, the beach faces out onto Burrard Inlet and is home to the longest swimming pool in Canada, the salt-water outdoor Kitsilano Pool, operated by the Vancouver Park Board and open during the summer.

Kits Beach, once named the third sexiest beach in the world in the 2009 ranking by Forbes Traveler magazine, is the easternmost beach in the chain that curls around Vancouver’s western coast. Southwest of Kits are Jericho Beach, Locarno Beach, Spainish Banks Beach, and Wreck Beach.

On hot summer days, the beach is packed with sunbathers and swimmers by the water, volleyball players on the sand, tennis players in the courts, and Frisbee players on the grassy lawn. Families making sand castles, see-and-be-seen hard bodies, flirting teens, quiet sun worshipers - everyone has a spot at Kits Beach. And with a cluster of bars and restaurants just across the street, the beach party can continue into the night.

Kits Beach is also the best beach for swimmers: the waters are usually calm and Kits Pool is part of the beach's extended park.

The major parking lots for Kits Beach are located off Cornwall Avenue, between Yew St. and Arbutus; this area also functions as a "main entrance" to the beach. The beach's pay parking lots are $2 per hour or $7 all day.

To take a bus, use Translink to plan a trip. To take a ferry, take a False Creek Ferry to Vanier Park/Vancouver Maritime Museum which is walking distance to Kits Beach.

Kits Beach was originally known as Greer's Beach, named for Sam Greer, one of the first non-native settlers in the area. Kitsilano Beach, as it is today, owes its existence to private citizens, who raised the money to purchase the land, and to the Vancouver Park Board, who leased additional lots to create the extended park.