(Redirected from Gulf of the Farallones) 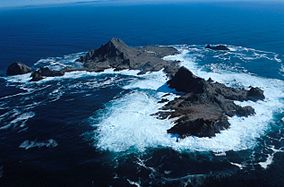 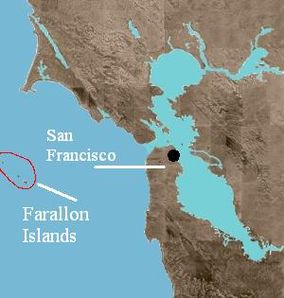 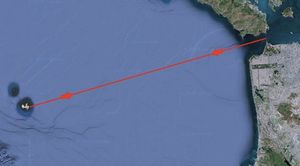 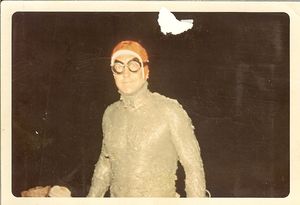 The Farallones or the Farallon Islands (from the Spanish farallón meaning "pillar" or "sea cliff"), are a group of desolate islands and sea stacks in the Gulf of the Farallones off the coast of San Francisco, California, USA. They are 27 miles outside the Golden Gate Bridge and are visible from the mainland on clear days. The islands are officially part of the City and County of San Francisco, California. The only inhabited portion of the islands is on Southeast Farallon Islands (SEFI), where research residents (PRBO) stay.

The islands were long known to the American Indians who lived in the Bay Area prior to the arrival of Europeans, but they are not thought to have traveled to them. The first European to record the islands was the Sir Francis Drake who landed on the islands in 1579 in order to collect seal meat and bird eggs for his ship. He named them the Islands of Saint James, a name that survives only in one of the rocky islets of the North Farallones. The islands were given the name "Farallones" (literally, "rocks out of the sea") by Spanish explorer Sebastián Vizcaíno, who first charted them in 1603.

After Alta California was ceded by Mexico to the US in 1848, the islands' environment became linked to the growth of the city of San Francisco. Beginning in 1853, a lighthouse was constructed and as the city grew, the seabird colonies came under severe threat as eggs were collected in the millions for the markets of San Francisco. The trade, which in its heyday could yield 500,000 eggs a month, was the source of conflict between the egg collecting companies and the lighthouse keepers. This conflict turned violent in a confrontation between rival companies in 1863. The clash between two rival companies, known as the Egg War, left two men dead and marked the end of private companies on the islands, although the lighthouse keepers continued egging. This activity, combined with the threat of oil spills from shipping in San Francisco's shipping lanes, prompted President Theodore Roosevelt to sign United States Executive Order No. 1043 in 1909, creating the Farallon Reservation, protecting the northern islands of the chain. This was expanded to all the islands in 1969 when it became a National Wildlife Refuge.

The islands are the site of many shipwrecks. The United States Coast Guard maintained a manned lighthouse until 1972, when it was automated. The islands are currently managed by the United States Fish and Wildlife Service, in conjunction with the PRBO Conservation Science (formerly Point Reyes Bird Observatory - PRBO). The islands are currently the subject of long term ecological research. Today, the Farallones are closed to the public, although birders and wildlife enthusiasts can approach them on whale watching boats and the sail-training vessel Seaward out of Sausalito.

The islands string northwestward from Southeast Farallon Island for 5 miles. They are protected in the Farallon National Wildlife Refuge, first established in 1909 with the Southeast Farallons added in 1969 and contain the largest seabird colony in the U.S. outside of Alaska and Hawaii.

Maintop Island (West End) is immediately to the west of Southeast Farallon Island separated by a narrow impassable gorge, The Jordan (Jordan Channel), which connects Mirounga Bay in the south to Maintop Bay in the north. It is the second largest island. The Great West Arch, a rock formation, is in the west of the island, and Indian Head in the south.

The Drunk Uncle Islets are a group of small rocks just northwest off Maintop Island.

Aulone Island and smaller Great Arch Rock (Arch Rock) are immediately north of the northern tip of Southeast Farallon Island. They are barely separated by a narrow gorge. Great Arch Rock is not to be confused with Great West Arch, a rock formation in the west of Maintop Island.

Hurst Shoal is located about one kilometer.

Middle Farallon Island is a high guano-covered black rock about 65 meters in diameter. This island is informally known as "the pimple."

Island of St. James is 47 meters high and about 125 meters in diameter.

There are five unnamed rocks less than 85 meters in diameter.

Five species of pinniped come to shore on the islands, and in some cases breed. These are the Northern Elephant Seal, Harbor Seal, Steller's Sea Lion, California Sea Lion, and the Northern Fur Seal.

Several species of cetaceans are found near the Farallon Islands, most frequently Gray whale]]s, Blue whales, and Humpback whales. Blue whales and Humpback whales are most frequently found near the islands in the summer and fall, when strong upwelling may support a rich pelagic food web. Killer whales are also found around the islands. Gray whales are reliably found near the Farallones during their spring migration north and the fall/winter migration south. Some Gray whales may also be found during the summer, when a few whales skip the trip north to Alaska and spend the summer months off the coast of Canada and the continental United States.

The elephant seal population attracts a population of Great White Sharks to the islands. In 1970 Farallon biologists witnessed their first shark attack, on a Steller’s sea lion. During the next fifteen years, more than one hundred attacks on seals and sea lions were observed at close range. By the year 2000, biologists were logging almost eighty attacks in a single season.

While the males return annually, the females return only every other year, often with fresh, deep bites around their heads. The seasonal shark population at the Farallones is unclear, with estimates from thirty to one hundred. The Farallones are unique in the size of the Great Whites that are attracted. The average length of a full-grown great white shark is 4 to 4.8 metres (13.3 to 15.8 feet), with a weight of 680 to 1,100 kilograms (1,500 to 2,450 lbs), females generally being larger than males. The largest accurately measured great white shark was a female caught in August 1988 at Prince Edward Island off the North Atlantic coast and measured 20.3 feet. A Killer Whale has been recorded on tape killing a Great White shark.

Some individual sharks have been tagged and found to roam the Pacific Ocean as far as Hawaii, returning regularly to the Farallones every year in the autumn.

From 1946 to 1970, the sea around the Farallones was used as a nuclear dumping site for radioactive waste under the authority of the United States Atomic Energy Commission at a site known as the Farallon Island Nuclear Waste Dump. Most of the dumping took place before 1960, and all dumping of radioactive wastes by the United States was terminated in 1970. By then, 47,500 55 gallon steel drum containers had been dumped in the vicinity, with a total estimated radioactive activity of 14,500 Curies. The materials dumped were mostly laboratory materials containing traces of contamination. Much of the radioactivity had decayed by 1980.

Waste containers were shipped to Hunters Point Shipyard, then loaded onto barges for transportation to the Farallones. Containers were weighted with concrete. Those that floated were sometimes shot with rifles to sink them.

This 30-mile course is renowned to be one of the two most difficult, coldest, most perilous marathon swims in the world. Water temperatures can range from 50°F (10°C) to 55.4°F (13°C), but temperatures have been recorded lower on several occasions. The water conditions are usually extremely rough with cresting ocean swells up to 20 feet. Currents and tides often exceed the speed of the fastest swimmers. It is a swim not lightly attempted.

A sanctioned swim covers the distance between the Northeast buoy at the Farallon Islands and the Golden Gate Bridge, either direction is acceptable. Land is never to be touched at the Islands, since they are a National Wildlife Refuge.

English Channel Rules apply with one exception - neoprene caps are allowed. The reason for this is the first swimmer to accomplish a never before accomplished feat sets the rules - both swimmers who completed the swim in 1967 wore neoprene caps.

1. Swimmers shall only be allowed to wear goggles, and swim suits without any kind of flotation. Wet suits strictly forbidden.

2. Swimmers shall keep their same order throughout and swim an hour each, with a total of five minutes allowed for transition.

There have been multiple attempts to swim from the Farallon Islands, but to date only two have accomplished this incredible feat.

1. Lt Colonel Stewart Evans The first successful swim was by Lt Colonel Stewart Evans in August of 1967. He landed by Bolinas after swimming 13:44:52 seconds, covering 18 nautical miles. He wore a neoprene cap from looking at his picture and greased himself up fairly well. He also landed on shore and walked on the beach under his own power in accordance with English Channel rules. Stuart is now deceased and no communication available.

2. Ted Erikson The second attempt completed was by Ted Erikson. On his first attempt in 1966 he went completely hypothermic and was reported "dead". He was revived, started life anew and failed again on his second attempt. He said he waited a year this time, brought the man upstairs along, and success.

Ted completed his swim on September 17th 1967 in 14:38 by swimming under the Golden Gate Bridge, covering 26.4 nautical miles. This is now the official start and finish line according to the Farallon Islands Swimming Federation.

Ted is very much alive living in Chicago and his website is here. He is a little hard of hearing so emails are much preferred and he is most open and cordial in sharing so much wonderful information. Ted's latest interview is here.

For more information on the Farallones and other swims check out The Daily News Open Water Swimming.

3. Dolphin Club The members of the Dolphin Club and the South End Rowing Club challenged each other to a race from the Farallones to the Club house each living side by side at Aquatic Park. They did the race in Sept or Oct of 1969. The records are being pieced together as we speak and this may be updated from time to time.

The Dolphin Club relay swam to the shores of Aquatic Park in 14 hours and defeated the South End Rowing Club, who got swept south then made it under the Golden Gate Bridge in 16 hours, but was forced to quit after encountering the beginning of the ebb.

The names of all the teams are being verified but two noteworthy people are Bob Roper, who swam for the South End Rowing Club - still swimming daily at age 70.

All the people I spoke with confirmed proper relay rules, no sharks, but everyone was scared - they were all honest. Water temperature ranged from 55 to 62 degrees F depending on who you talk to and they started the race at 11pm.”

SEQUEL, a Grand Banks East Bay 43 that belongs to Vito & Linda Bialla, is available for escorting solo and relay swimmers.

JAWS, a Grand Banks 32 that belongs to John & Lisa Matthews, is available for escorting solo and relay swimmers.

The Farallon Islands Swimming Federation course falls entirely within the Red Triangle, an area off the coast of northern California, extending from Bodega Bay, north of San Francisco, out slightly beyond the Farallon Islands, and down to the Big Sur region, south of Monterey. This area has a very large population of marine mammals, such as elephant seals, harbor seals, sea otters, and sea lions, which are favored meals of Great White Sharks. Around 38% of recorded Great White Shark attacks on humans in the United States have occurred within the Red Triangle — 11% of the worldwide total.

Photos and videos are provided by The Farallons Islands Swimming Federation.

News and real-time GPS tracking of solo and relay swimmers are provided by the Farallon Islands Swimming Federation.