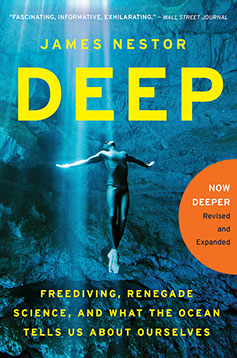 DEEP: Freediving, Renegade Science, and What the Ocean Tells Us about Ourselves written by James Nestor

noun - Freediving (or free-diving) is a form of underwater diving that relies on a freediver's ability to hold his or her breath until resurfacing rather than on the use of a breathing apparatus such as scuba gear. Examples include breath-hold spear fishing, freedive photography, recreational breath-hold diving, apnea competitions, and to some degree, snorkeling.

The activity that garners the most public attention is the extreme sport of competitive apnea in which competitors attempt to attain great depths, times, or distances on a single breath.

Karsten Moeller is an American freediver.

Freediver Karsten Moeller in the Red Sea in the dive site of Chrisoula K, a Greek registered freighter and on its final journey its cargo consisted of Italian floor tiles heading for Jeddah. It sank 31 August 1981 after Captain Kanellis passed over control of his ship following two days of intensive navigation. Shortly after the engines were set at full speed and the Chrisoula K was driven right into the northeast corner of Sha'ab Abu Nuhâs Reef.

The Chrisoula K now sits in a large open, sandy space. The bows used to rise out of the water, but wave action has now reduced them to a few metres below the surface. The main body of the wreck is generally upright with the cargo of tiles still in place. The stern leans well over to the starboard and is slowly separating altogether. Deep inside the stern, the engine room offers some serious penetration diving for the experienced wreck diver, although there are numerous obstructions so be careful. There is also the possibility of some much more straightforward penetration with plenty of easy swim-throughs and access to areas worthy of exploration without the danger of becoming lost inside. At the seabed, the large propeller and rudder are still virtually undamaged at the maximum depth for this dive of 26m. The Chrisoula K is now covered in an assortment of hard corals and has been made home by a variety of reef fish. This shipwreck offers a variety of different dives to cater for all levels of experience.