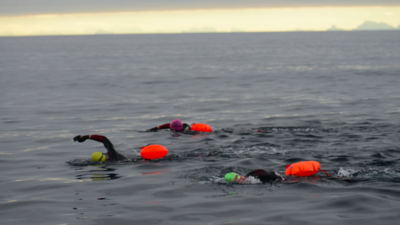 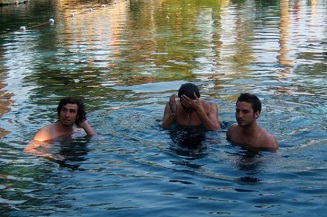 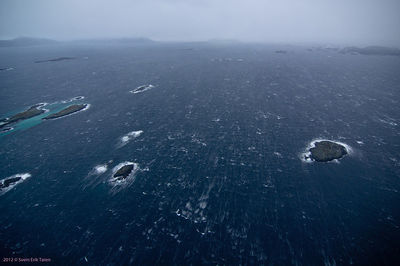 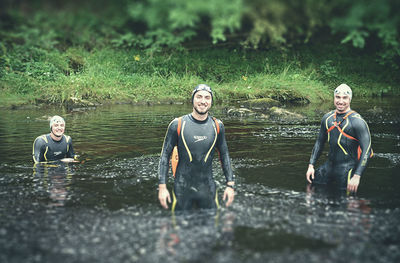 The Hudson Brothers or the Wild Swimming Brothers include 27-year-old Jack Hudson (Little Brother), 29-year-old Calum Hudson (Middle Brother), and 32-year-old Robbie Hudson (Big Brother). They do a number of OSS Adventure Series (Outdoor Swimming Society Adventure Series) events. Their extreme swims also include the Hudson Brothers on the River Eden, a stage swim, and Into the Maelstrom, an unprecedented two-stage swim across the world's largest and most powerful whirlpools.

They coined the term Maelstrom Seven in October 2018.

The Swim the Eden Expedition is an unprecedented 3-man 90-mile 9-day stage swim by Jack Hudson, Calum Hudson and Robbie Hudson down the length of the River Eden in Cumbria, England where each brother will swim the entire length of the river. They are inviting 5 OSS swimmers to join them on their penultimate and final days.

Into the Maelstrom was an open water swimming tandem swim by the Wild Swimming Brothers (including 24-year-old Jack Hudson, 26-year-old Calum Hudson and 29-year-old Robbie Hudson) to swim across the two biggest and most powerful whirlpools in the world, the Moskstraumen and Saltstraumen in Norway. Swirling violently off the Norwegian coast, above the Arctic Circle and on the edge of the Lofoten Islands, these two vast whirlpools have the strongest and fastest tidal currents in the world. The swimming expedition was scheduled for 20-29 August 2016 and serves to raise awareness about oil drilling plans in the Lofoten Islands.

Wild Swimming Brothers - Calum, Jack, and Robbie Hudson - are adventure-seeking adrenaline junkies who pursue aquatic challenges in risk-taking locations. They take a different spin on the sport of open water swimming than hardened bioprene solo channel swimmers or elite competitive swimmers racing in closed flat-water circuits. The Hudson Brothers embody the spirit of wild swimming and enjoying challenging epic swims in various open bodies of water around their native Great Britain and across the globe. They launched a new YouTube channel aimed at wild swimming, both for veterans and newcomers of this exciting, exploding niche. For creating entertaining videos and short stories from their expeditions and tours of their jaw-dropping aquatic journeys, for providing tips and advice on how to get into and enjoy wild swimming, for bringing their extroverted personalities to add color, humor and excitement to wild swimming, the Wild Swimming Brothers’ creativity is a worthy nominee for the 2017 World Open Water Swimming Performance of the Year.

Calum, Jack, and Robbie Hudson are adventure-seeking, adrenaline junkies who pursue aquatic challenges in risk-taking locations. The three brothers tackled their most jaw-dropping traverses to date - crossing the largest whirlpools on Planet Earth. After crossing the Corryvreckan near the Scottish Island of Jura, they headed off to Norway's Arctic Circle for a swim in partnership with World Wildlife Fund - Norge. They chose to swim across two very powerful whirlpools: Saltstraumen and Moskstraumen. They swam across these violently swirling vortexes off the Norwegian coast above the Arctic Circle, risking their lives while crossing strong tides amid killer whales and Lion's Mane jellyfish. Saltstraumen was a 10-minute focused sprint of 250 meters with less than 60 seconds to spare for death-threatening failure. Mosktraumen was a 8 km 2 hour 31 minute crossing between the islands of Vaeroy and Mosken in 9°C water, Norwegian sea currents and storm flow, the furthest distance swum within the Arctic Circle. For facing their deepest fears in terrifically perilous conditions, for raising awareness about the Norwegian government's plans to drill for oil in a wildlife haven in a brotherly tandem swim, for inspiring others to embark on their own challenges, the Hudson Brothers' Into the Maelstrom is a worthy nominee for the 2016 World Open Water Swimming Performance of the Year.

Swim Wild: Dive into the natural world and discover your inner adventurer is a book of wild swimming by Jack Hudson, Calum Hudson and Robbie Hudson, published by Yellow Kite Books.