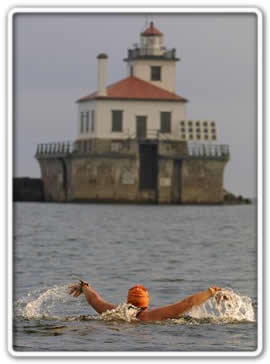 Vicki Keith Point is at the end of the Leslie Street Spit in Toronto, Canada on Lake Ontario where Canadian marathon swimmer Vicki Keith has made most of her landings after crossing Lake Ontario.

She currently holds 16 world records and has received over 41 honours and awards and has raised over C$1 million to help children with physical disabilities. Retired from marathon swimming since 1991, Keith continues to raise awareness and funds for programs and projects to help children with physical disabilities and makes public appearances as an inspirational speaker.

She came out of retirement to attempt a new world record on August 5, 2005. Her goal was to swim 84 km (52 miles) from Oswego, New York to Kingston, Ontario. However, her attempt was cut short due to high waves. Just before leaving the water, she was averaging only one kilometer an hour because of waves more than two meters tall. If Keith had continued, the wind and waves would have added 30 more hours to her expected 48-hour swim.

Two weeks after her unsuccessful attempt, Keith was back in the water. This time the route was a shoreline swim that saw her travel from Point Petre in Prince Edward County to Long Point, then diagonally to the north shore of Amherst Island, along Amherst Island to Griffin Point, across to Fairfield Park and then along the shore to Lake Ontario Park. She completed 80.2 kilometers, setting a new world record for distance butterfly. The swim, originally predicted to take 48 hours, took 63 hours and 40 minutes (over 2½ days). Keith had to fight high winds and waves, strong currents, cold temperatures, and hallucinations as she pushed beyond what most believed feasible to accomplish her goal.