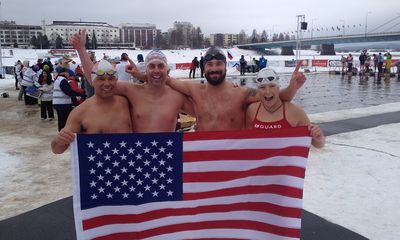 Winter swimming is extremely popular in countries with colder climates and competitions in Russia, the Czech Republic, Poland, Sweden, Finland, Latvia, Estonia and China. Even Great Britain and South Africa events typically draw hundreds of swimmers. Over 1,000 swimmers competed in the 2014 Winter Swimming World Championships which were held in Lapland, Finland. In the US, interest in winter swimming has been growing over the past five years. The USWSA was formed to make these competitions available in the United States.

On 14 February 2015, the first sanctioned Winter Swimming Championship in North America was held in Newport, Vermont in Lake Memphremagog in accordance with rules of the International Winter Swimming Association and in collaboration with Kingdom Games. Co-organizers include Phil White, Darren Miller, R. Cristian Vergara, Melissa O’Reilly, Brad McVetta and Janet Manning with the assistance of Mariia Yrjö-Koskinen and Aleksandr Jakovlevs of the International Winter Swimming Association.

On 30 January 2016, the first sanctioned USWSA National Winter Swimming Championship will be held in La Marina in the Hudson River, co-hosted by the U.S. Winter Swimming Association and the Coney Island Polar Bear Club.

Co-founders and Board Members[edit]