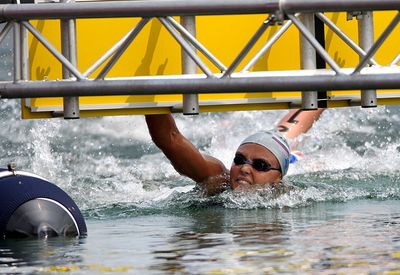 noun - The Ilchenko is a move at the end of an open water swimming competition where a swimmer who has been drafting for most of the race outsprints their competitors at the end of the race.

Even sports announcers have been associated with memorable verbal descriptions of sports events. The Miracle on Ice, he could…go…all…the…way! and back-back-back-back) are just a few examples in the American sporting world.

Ilchenko’s trademark move is a classic to watch and extremely difficult to compete against.

She expertly drafts off of the lead swimmers for a majority of the race, aggressively protecting her #2 or #3 position in the pack, which is difficult to consistently do throughout a 2-hour 10 km marathon swim. Then, around the last turn buoy, she gets ready to make her signature move. With the finish approaching, sometimes with less than 100 meters to go, Ilchenko picks up her kicking speed and literally swims around her competition, often on the opposite side to which her opponents breathe, to win the race.

Much easily said than done, Ilchenko puts in tremendous hours and work to be able to pull off The Ilchenko. Recently, she told former world champion Shelley Taylor-Smith that she has not taken a day off in 2008. "I only had 7 days out of the water in 2007. I am looking forward to some time off I hope."

The dominance of Ilchenko has stymied her competition ever since she first won the 5K world championships in 2004 in Dubai. Year in and year out, at every major race, everyone knows Ilchenko's blazing finish will come...they just can't seem to do anything about it. Fast pace, slow pace, ocean, lake, she comes through at the end with 'The Ilchenko'.

At the Singapore leg of the FINA 10K Marathon Swimming World Cup, [Shelley Taylor-Smith]] asked Ilchenko's competitors how they plan to dethrone her.

Fourth-place Olympic 10K Marathon Swim finisher Angela Maurer of Germany told Taylor-Smith, "The difference between Larisa and the rest [of us] is not that she is faster, but that she swims smarter than the rest of the competitors."

Brazilian open water swimming coach Igor de Souza said of his swimmer, "…we will now go back and prepare…on becoming a 'smart racer'. She must learn to race. Speed is important, yes. But thinking like a 10K marathon swimmer is what wins. I believe that is what it is going to take to beat Larisa."

To equate "The Ilchenko" with a land-based move, sports fans are reminded of the incredible 10K run at the 1964 Tokyo Olympics of Billy Mills which is considered one of the greatest individual efforts in Olympic history. Just as Mills barreled down the runway in the 10,000-meter run in Tokyo to the surprise of everyone, Ilchenko flies down the straightaway in her 5K and 10K swims...to the surprise of none.

Usage dating to circa 2007 from Steven Munatones in Huntington Beach, California.