The Golden Age of Swimming: A Picture History of the Sport & Pools That Changed America

(Redirected from The Golden Age of Swimming) 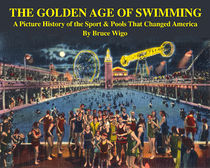 The Golden Age of Swimming: A Picture History of the Sport & Pools That Changed America was published in 2009 by Bruce Wigo, President and Chief Executive Officer of the International Swimming Hall of Fame. The book chronicles the pastime's beginnings in ancient Rome, through the Victorian and into the 20th century. Its artwork comes from a collection of photographs, postcards, news clippings and other history sources, painstakingly assembled by Wigo. The Golden Age of Swimming also deals with the sport's darker past, such as racial discrimination when large public pools first became popular.

Bruce Wigo has been the innovative and tireless President and Chief Executive Officer of the International Swimming Hall of Fame since 2005. He is lawyer who has achieved success in turning around financially troubled non-profit businesses.