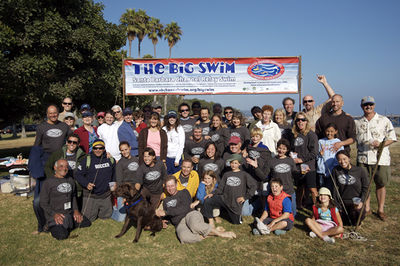 The Big Swim, a charity swim by 55 open water swimmers to benefit the National Marine Sanctuary Foundation and Heal the Ocean, organized by Emilio Casanueva of the Santa Barbara Channel Swimming Association 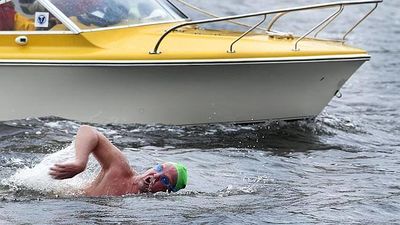 Dan Curtis successfully swimming 34 km in The Big Swim along the River Derwent on 31 January 2015 in Tasmania, Australia. Photo by Kim Eiszele.

The Big Swim (Santa Barbara) or the Santa Barbara Channel Relay Swim is a 42 km (26 mile) charity swim by 55 open water swimmers from Santa Cruz Island among the Channel Islands to East Beach in Santa Barbara, organized by Emilio Casanueva on 11 September 2009.

The Big Swim (Queensland) is an ocean swim from Palm Beach to Whale Beach in Queensland, Australia/

The Big Swim (Tasmania) or the Big Swim Derwent River Marathon is a 34 km marathon swim from the New Norfolk Bridge to the Tasman Bridge in Hobart along the River Derwent in Tasmania, Australia.

The Big Swim from New Norfolk Bridge to the Tasman Bridge was first attempted by Chris Guesdon. 12 other people have attempted the 34 km swim since. Des Renford was the first to complete the distance on 25 January 1975, completing the swim in 10 hours 54 minutes. Dick Campion set the record of 9 hours 19 minutes in 1976 and the record has not been broken since. Jenny Anderson set the women's record of 9 hours 44 minutes also in 1976. The fastest relay team is Park Beach SLSC as they swam 6 recurring 1-hour legs English Channel-style in 7 hours 43 minutes in 1974. Dan Curtis of New York is the last person to complete the swim, in 16+ hours on 31 January 2015.

The water temperature ranges from 13-15°C (55-59°F) and the river is subject to massive winds against the swimmer and escort craft that blow from Antarctica. No full body fast suits are allowed; only swim briefs and no wetsuits.

The race starts at the New Norfolk Bridge and finishes at the Tasman Bridge. The event is under the authority of the Australian Marathon Swimming Federation.

The Big Swim (Ojos Swim) is a high-altitude swim on Mt Tres Cruces in December 2015 at 5,909 m (19,386 feet) above sea level with team doctor Darryl Wood in assistance by high-altitude swimmers Jean Craven (founder), Milton Brest, Evan Feldman, Chris Marthinusen, Herman van der Westhuizen, Robert Graaff, and Juandre Human. The Ojos swim is part 1 of 2 of the Hi/Low Swim Challenge: Ojos will be the highest swim and the Dead Sea from Jordan to Israel will be the lowest open water swim in the following year.