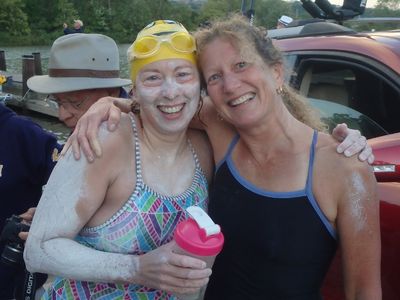 Nazareth College Finger Lakes Challenge (or The 5 Majors & The 4 Minors Swimming for a Cause) is an 9-stage 167.01-mile solo swim by Bridgette Hobart, starting on 11 July 2015, where she will attempt to swim 9 of the 11 New York Finger Lakes.

The goal is to promote Nazareth with a focus on the new Wellness and Rehabilitation Institute which benefits the Rochester/Finger Lake communities.

Bridgette Hobart started the 9-stage 156-mile solo swim on 11 July and finished on 26 September 2015. Her course included two challenges within the New York Finger Lakes: the Majors and the Minors. The Majors includes the lakes over 11 miles, ranging from 15.5 to 38 miles each with Canandaigua, Keuka, and Skaneateles in July and 38-mile Cayuga Lake and 38-mile Seneca Lake in August.

The New York Finger Lakes are a group of eleven long, narrow, basically north-south lakes in the west-central section of upstate New York in the United States. This region is defined as a bioregion. They are a popular tourist destination. The lakes' shapes reminded early map-makers of human fingers, and the name stuck. Cayuga (435 feet, 133 m) and Seneca (618 feet, 188 m), are among the deepest in the United States, with their bottoms well below sea level. Both are close to 40 miles long (64 km) from end to end, and never more than 3.5 miles (5.6 km) wide. Cayuga (38.1 miles ) is the longest, and Seneca 66.9 square miles (173 km2) the largest in total area. Oneida Lake is generally not considered one of the Finger Lakes, but it is sometimes called the "thumb", while Seneca is the middle finger.

There are 11 Finger Lakes, referred to as the Minors and Majors including the following: