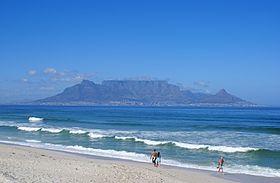 Table Mountain is a flat-topped mountain forming a prominent landmark overlooking the city of Cape Town in South Africa, and is featured in the flag of Cape Town and other local government insignia. It is a significant tourist attraction, with many visitors using the cableway or hiking to the top. It is also a geological feature used by open water swimmers swimming in the area.

The main feature of Table Mountain is the level plateau approximately 3 kilometers (2 miles) from side to side, edged by impressive cliffs. The plateau, flanked by Devil's Peak to the east and by Lion's Head to the west, forms a dramatic backdrop to Cape Town. This broad sweep of mountainous heights, together with Signal Hill, forms the natural amphitheater of the City Bowl and Table Bay harbor. The highest point on Table Mountain is towards the eastern end of the plateau and is marked by Maclear's Beacon, a stone cairn built in 1865 by Sir Thomas Maclear for trigonometrical survey. It is 1,086 metres (3,563 ft) above sea level, about 19 meters (62 feet) higher than the cable station at the western end of the plateau.

The cliffs of the main plateau are split by Platteklip Gorge ("Flat Stone Gorge"), which provides an easy and direct ascent to the summit and was the route taken by António de Saldanha on the first recorded ascent of the mountain in 1503.

Table Mountain is at the northern end of a sandstone mountain range that forms the spine of the Cape Peninsula. To the south of the main plateau is a lower part of the range called the Back Table. On the Atlantic coast of the peninsula, the range is known as the Twelve Apostles. The range continues southwards to Cape Point.