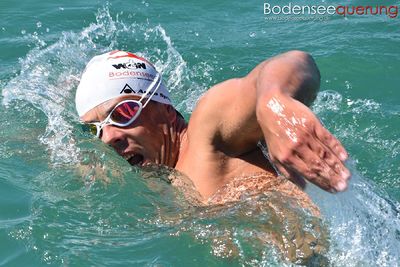 Sven Eckardt in the Bodensee in Germany 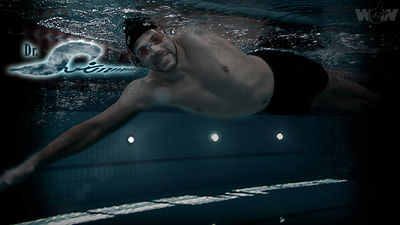 Sven Eckardt is a 47-year-old German swimmer and handicapped paraplegic with cerebral paralysis on his legs from Gärtringen whose nickname is Dr. Svimmm. He is a consultant in energy questions in hotels around the world. He holds a doctorate in engineering.

On 6 August 2017, he swam a 12 km widthwise crossing of Bodenseequerung (Lake Constance), the largest lake in Germany, the first attempt by a handicapped swimmer in 5 hours 33 minutes. He swam with a commercial pull buoy to support his legs.

Sven Eckardt, known as Dr. Svimmm in his native Germany, is a paraplegic with cerebral paralysis who loves swimming. The 47-year-old hotel consultant with a doctorate in engineering crossed widthwise across Lake Constance (Bodenseequerung), the largest lake in Germany, despite having paralyzed legs. For his 5 hour 33 minute crossing that was the first crossing of the Bodensee by a handicapped swimmer, for his palpable joy in achieving his lifelong dream to complete a marathon swim, for working to encourage other disabled people to set their own goals and realize their dreams, Sven Eckardt’s Bodensee crossing is a worthy nominee for the 2017 World Open Water Swimming Performance of the Year.