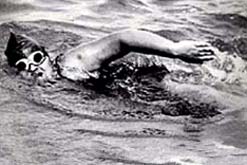 Ethel 'Sunny' Lowry MBE (born 2 January 1911, in Longsight, Manchester, Lancashire – died 21 February 2008) of Great Britain was an open water swimmer and administrator who was inducted in the International Marathon Swimming Hall of Fame as an Honour Administrator in its Class of 2003.

In the 2009 International Swimming Hall of Fame Yearbook, her induction was as follows:


"Sunny Lowry took the mantle as President of the Channel Swimming Association at the death of Commander Gerald Forsberg, who had been the Association President for 37 years. For seven years, she was the leader of the Association until her retirement in November of 2007. She died the next year at the age of 97.

For over 75 years she was involved in long distance swimming and her knowledged of all aspects of swimming, training, teaching the disabled, lifesaving, long distance and pilot lifesaving was immense.

In the summer of 1932, only six women, and eight men had ever swam the English Channel and she wanted to be the next one. Her first attempt ended after 14 hours and only one mile from Calais, France. The next year she completed the swim in 15 hours 41 minutes.

She taught swimming and lifesaving with her husband Bill, as well as teaching the disabled to learn to swim. Following a tragedy on Lake Windermere, together they started the Pilot Lifesaving Scheme, a safety program.

At the young age 16, she became a committee member of her local swimming club. She was a member of three swimming clubs in total, was a founding member of the British Long Distance Swimming Association, and continued in administrative positions for most of her life. In 2006, she was awarded the MBE for her services to swimming.

Outside of her Channel swimming activities, Sunny was a constant indefatigable supporter of Manchester's Victoria Baths; turning out in all weather and at every opportunity to support its fund raising efforts. She was delighted to have been one of the select few presented to Prince Charles when he visited the Baths. She can proudly claim to have been a driving force in the success of Manchester's Victoria Baths restoration, in winning a 3.5 million pound grant in the first of the BBC Restoration programmes."