(Redirected from Straits of Melaka) 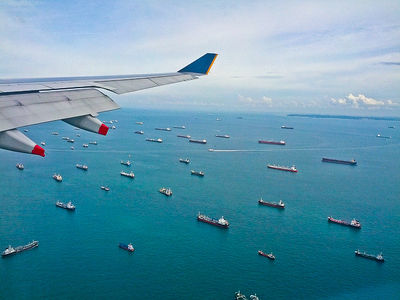 Ships in the Strait of Malacca

The Strait of Malacca (Malay: Selat Melaka, Indonesian: Selat Malaka; Jawi: سلت ملاک) or Straits of Malacca or Straits of Melaka is a narrow, 805 km (500 miles) stretch of water between the Malay Peninsula (Peninsular Malaysia) and the Indonesian island of Sumatra. It is named after the Malacca sultanate that ruled over the archipelago between 1400 and 1511.

From an economic and strategic perspective, the Strait of Malacca is one of the most important shipping lanes in the world. The strait is the main shipping channel between the Indian Ocean and the Pacific Ocean, linking major Asian economies such as India, China, Japan, Taiwan, and South Korea. Over 94,000 vessels pass through the strait each year, carrying about one-fourth of the world's traded goods, including oil, Chinese manufactured products, and Indonesian coffee. About a quarter of all oil carried by sea passes through the Strait, mainly from Persian Gulf suppliers to Asian markets. In 2007, an estimated 13.7 million barrels were transported through the strait, increasing to an estimated 15.2 million barrels in 2011. In addition, it is also one of the world's most congested shipping choke points because it narrows to only 2.8 km (1.5 nautical miles) wide at the Phillips Channel (close to the south of Singapore).

The maximum size of a vessel that can pass through the Strait is referred to as Malaccamax. For some of the world's largest ships (mostly oil tankers), the Strait's minimum depth (25 metres or 82 feet) isn't deep enough. In addition, the next closest passageway (the Sunda Strait) is even more shallow and narrow than Malacca. Therefore, these large ships must detour several thousand miles/kilometers and use the Lombok Strait, Makassar Strait, Sibutu Passage, or Mindoro Strait instead.

There are 34 shipwrecks, some dating to the 1880s, in the Traffic Separation Scheme (TSS), the channel for commercial ships. These pose a collision hazard in the narrow and shallow strait.

Another risk is the yearly haze caused by raging bush fires in Sumatra. It can reduce visibility to 200 metres (660 ft), forcing ships to slow down in the busy strait.