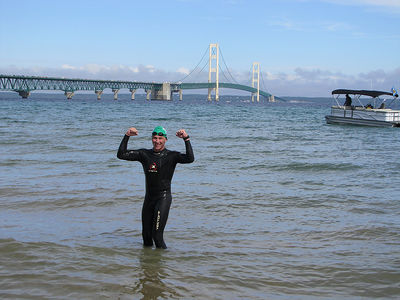 The Mighty Mac Swim in the Straits of Mackinac in Michigan

The Straits of Mackinac is the narrow waterway separating the U.S. State of Michigan's Lower Peninsula from its Upper Peninsula. It connects two of the Great Lakes, Lake Michigan and Lake Huron. The Straits of Mackinac a major shipping lane providing passage for raw materials and finished goods and site of the Mighty Mac Swim. The straits is five miles (8 km) wide at its narrowest point, where it is spanned by the Mackinac Bridge. Before the bridge was built, car ferries transported vehicles across the straits. Today passenger-only ferries carry people to Mackinac Island, which does not permit cars. Visitors can take their vehicles on a car ferry to Bois Blanc Island.

Islands in the Straits of Mackinac include the two populated islands, Bois Blanc and Mackinac, and two that are uninhabited: Round and St. Helena islands. At 11 miles (18 kilometers) in length, Bois Blanc is the largest island in the Straits. The straits are shallow and narrow enough to freeze over in the winter. Navigation is ensured for year-round shipping to the Lower Great Lakes by the use of icebreakers.

On 3 September 2007, Jim Dreyer, Kellie Nightlinger and 50 swimmers of Team Dire Straits crossed the Straits of Mackinac in a charity swim to celebrate the 50th anniversary of the Mackinac Bridge,swimming between Michigan’s upper and lower peninsulas. The Mighty Mac 50th Anniversary Swim was part of the 50th Annual Mackinac Bridge Walk, a 4-mile swim from St. Ignace to Mackinaw City. Governor Jennifer Granholm initiated the annual bridge run and came up with the idea of having 50 swimmers cross the Straits for the 50th Anniversary of the bridge.