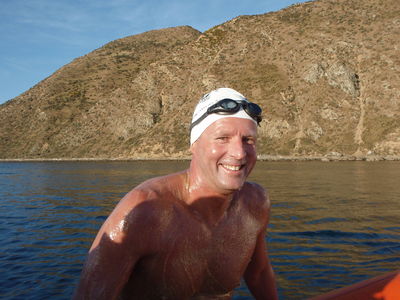 Stephen Junk before jumping in the Cook Strait in New Zealand

Stephen Junk (born 22 September 1960) is a 61-year-old Australian embryologist, marathon swimmer and channel swimmer with 6 of the Oceans Seven channels and the Triple Crown of Open Water Swimming completed to date.

Junk was named to the World's 50 Most Adventurous Open Water Men in 2017 (alphabetized by last name) by the World Open Water Swimming Association:

• No wetsuits. Swimsuits must be FINA approved.
• No artificial aids.
• No external assistance to the swimmer. The swimmer cannot be touched (except on the relay changes) or be supported while swimming.
• Relay changeovers to occur each hour. That is, one person swims for one hour, and then has five hours rest, repeating the sequence until the finish.
• Each relay change to occur by the fresh person swimming up behind the retiring swimmer, tagging hands above the water and then taking over.
• Swimmers to remain in their designated order.
• Swimmer to clear the water at the end of each lap and immediately return and recommence swimming.