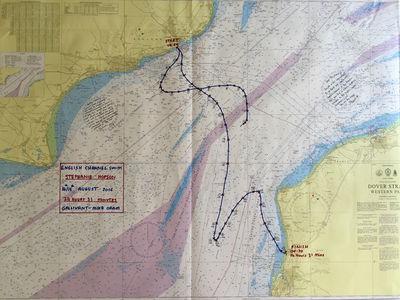 Stephanie Hopson is a 41-year-old American open water swimmer and a member of the 24-hour Club and the Triple Crown of Open Water Swimming from Woodland Hills, California who serves as a Marathon Swimming Mentor.

Stephanie Hopson was on track to complete a crossing of the English Channel. But halfway across, disaster struck 11 hours out from shore. The propeller of her escort boat got tangled in a crab pot and its dangling ropes. The 39-year-old continued to swim in the pitch darkness before her crew aborted her swim. Despite her dreams being dashed by the unexpected, her escort pilot Mike Oram gave her a second chance five days after being pulled from the Channel. Her crews on both her first and second attempts encouraged her to give it a go; she was up to the challenge, both mentally and physically prepared for another opportunity. For ultimately completing the fourth longest English Channel crossing in history, for dreaming big and believing in herself to become a Channel Swimmer, for courageously taking 24 hours 31 minutes to cross the English Channel, Stephanie Hopson's English Channel Crossing is a worthy nominee for the 2016 World Open Water Swimming Performance of the Year.