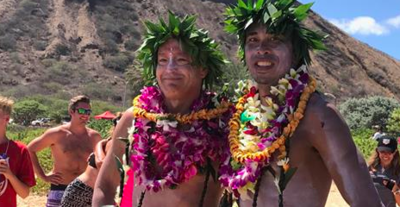 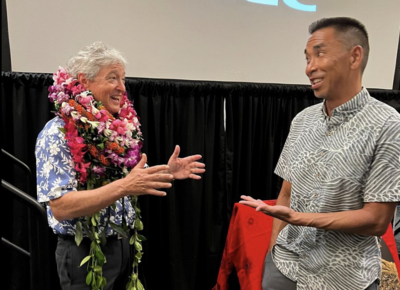 Stefan Reinke at the Hawai'i Swimming Hall of Fame, Class of 2021 induction ceremonies

Stefan M. Reinke graduated from Leilehua High, Class of ’76, where he won the outstanding swimmer award in 1976. He then attended Bakersfield College where he lettered in swimming, 1977-78 and set the school record in the 400 IM. He later attended USC then earned his law degree at UC-Davis. He has completed 18 Waikiki Roughwater Swims, 8 Double Roughwater Swims, and won his age group 6 times in the North Shore Swim Series. He has made 15 channel crossings in Hawaii since 2014 and was named Male Swimmer of the Year by Waikiki Swim Club in 2014. He is current president of the Waikiki Roughwater Swim committee, past president of Outrigger Duke Kahanamoku Foundation, and has served as race director for numerous ocean races throughout Oahu. He is a practicing attorney in Hawaii and a lecturer at the Richardson School of Law.