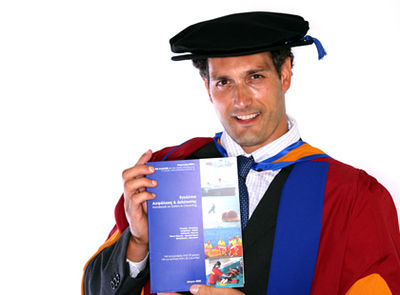 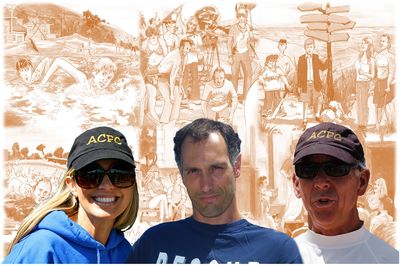 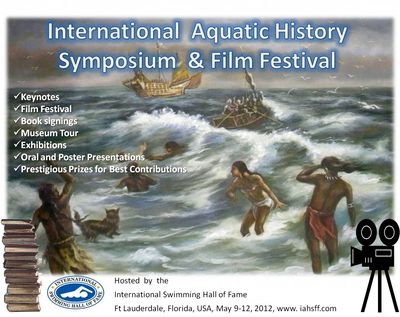 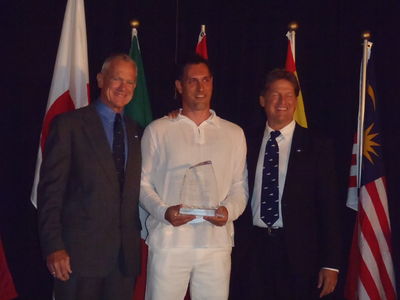 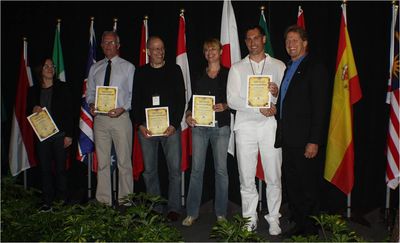 Dr. Stathis Avramidis, with other award winners, is presented with the "Best Young Film Director" by ISHOF's CEO Bruce Wigo 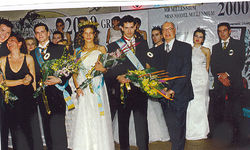 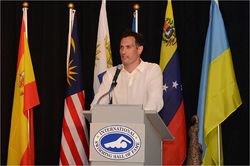 Stathis Avramidis, Ph.D. (Δρ Στάθης Αβραμίδης) is a prolific author and advocate of water safety. He has served and popularized aquatics and water safety since 1988 as athlete, lifeguard, trainer, instructor, amateur film director, event organizer, academic, author, researcher and media professional. He is an officer in the National Public Health Organization, a Teacher of Applied Lifeguarding and Lifesaving Sport in the School of Sports Science and Physical Education at the University of Athens and the President of the Greek Lifesaving Sports Association.

On 4 February 2020, Stathis established the Greek Lifesaving Sports Association (GLSA) in Greece. The aim of this not-for-profit organization is to promote water safety and lifesaving sport. The organization has 3 membership categories; Individual, Club and prestigious Honorary Members.

The GLSA is the powerhouse of lifesaving sport in Greece. It was founded in loving memory of 3 relatives that passed away at sea.

Stahis holds a Diploma of Education on "Adapted Physical Education" (with a mark of 10 "excellent") and a Bachelor of Science in "Sport Science and Physical Education" (graduating with the highest mark 8.39/10 among 105 graduates) from the University of Athens (Greece 1999). He also completed a Master in Sport/Exercise Science and a PhD on lifesaving and drowning respectively at Leeds Metropolitan University (England 2001; 2009), and a Master on Public Health at the National School of Public Health (Athens, Greece 2016).

Stathis is an officer at the National Public Health Organization. Ηe teaches the modules of “Applied Lifeguarding” and “Lifesaving Sport” at the School of Sport Science and Physical Education at the University of Athens.

In the past, he was the Lifesaving Sport Director of the Hellenic Federation of Underwater Activity and Sport Fishing in Greece, Accident Prevention and Health Education Advisor at the Secretary General of Public Health, of the Hellenic Ministry of Health, and a Lecturer of Aquatics/Visiting Research Fellow (Leeds Metropolitan University, UK 2003-2012).

He appeared in television and radio hundreds of times, as invited guest speaker on water safety issues, extra actor/model in television series/shows and interviews. He presented the radio program "Lifeguarding without a teacher" (91.2FM Radio, 2003) and the television program "Prevention and Rescue" (Aroma Elladas Magazino, 2013). Stathis is an Honorary Member of the International Drowning Prevention Alliance.

Dr Avramidis has been honored with several awards and distinctions dozens times in many countries for his work. Particularly, he was the recipient of the prestigious Paragon Aquatic Safety Award and the "ISHOF Service Award" from the International Swimming Hall of Fame "for his outstanding work on water safety and lifeguarding worldwide and the mission of ISHOF". In addition, he was presented with 4 RLSS Commonwealth Diploma Awards, whose Patron is Queen Elizabeth II. At the International Aquatic History Symposium & Film Festival he was awarded with the "Most Prolific Contributor Award 2012" and "Best Young Film Director Award 2012". His Film "Ode to (Lifesaving) Joy" was honored with the "Special Diploma for Masterful Storytelling of Red Cross Events at the 17th International Red Cross and Health Film Festival (Varna, Bulgaria October 2015). In 2022, the International Lifesaving Federation presented to him the Citation of Merit.

A documentary called "STATHI" depicts the life and work of Dr. Avramidis. The story deals about a poor young man, who had skeletal problems and could not speak English, who was collecting food from bin bags separating it from the cigarette aces and whose mother did a starvation strike out of the Ministry of Education fighting for his rights to study in Higher Education. Despite several obstacles, he became national water polo champion, an award-winning male model in beauty contests, one of the most prolific aquatic safety authors and winner of various awards. This story has not only touched and inspired the viewers of different nations but also gives hope and courage to those who dream to achieve goals beyond their financial and language abilities. Another video “The Greek Waterman” portrays Stathis’ life. (video: https://youtu.be/uGJCHVWMU3U)

He has authored over 300 publications including books, chapters, peer reviewed journal articles, DVDs, conference proceedings and articles in popular technical aquatic magazines/newspapers (see list here. Dr. Avramidis has published several books. Among his most popular and widely used publications the following stand out.

He authored the fairy tale book "A Chance For Children" based partially on the life and work of Greg Bonann (creator/director/producer of Baywatch and SAF3) and Tai Collins (screenwriter of SAF3). This fairy tale book, aims to be a humn to human empowerment and to pay a tribute to the inspirational work of Greg and Tai who founded the real "A Chance For Children" Foundation. He co-authored with Professor J. M. Holden Ed.D., the book "Near-Death Experiences while Drowning. Dying is not the End of Consciousness" that was published in September 2015 by Eagle Editions at the University of North Texas (more). He published the "Lifesaving Sport", a book with 46 co-authors from 12 countries.

He co-authored with Ioannis Dimakopoulos and Dr. Ioanna Mastora the book “Lifesaving as Olympic Sport” that was highly commented by several prestigious lifesaving, swimming and Olympic authorities.

He is the organizer of the project “Safe Greece” that is implemented by the Greek Lifesaving Sports Association with the support of the Princess Charlene of Monaco Foundation (PCMF). Since 2015, each year the project benefits between 3,000-16,000 people (children or adults) on water safety and lifesaving sport.

He is the editor and publisher of the e-magazine “Sport Lifesaver” that is distributed each month freely to prestigious personalities and national or international organizations in over 120 countries. The magazine acts as a scholarly pedestal for outstanding individuals (Hall of Famers, authors, academics, top athletes and organization representatives). It contains articles of prestigious individuals, professionals and other credible authorities. Among the most notable people that have been published in it are HSH Princess Charlene of Monaco, Greg Bonann (the famous director of the TV show “Baywatch”), Dr. Harald Vervaecke (the “father” and Secretary General of the International Life Saving Federation), Dr. Tom Griffiths (ISHOF Paragon Water Safety Award recipient), Dr. Joost Bierens (ISHOF Paragon Water Safety Award recipient) to mention a few.

Some of the above programs, are freely available online here: http://sportlifesaving.blogspot.com/p/blog-page_4.html

Dr Avramidis is known for his humorous and philosophical quotes:

•"I always tried to have my wordrobe and fridge semi-full and my library full" (Interviewed about his "Mr Greece 2000" title in the TV program "Aroma Elladas" 2000).

•"When we meet, our Creator will ask us what we did in our lives for love and learning" (in his book 'A Chance For Children' 2013).

•"I got an office at the Hall of Fame where there was a label that said 'everyone brings joy to this office; some when they come and some when they leave'. Thank you for honoring me tonight for my work and because I am Greek" (awarding ceremony at the International Swimming Hall of Fame, USA 2012).

Charlie the savior is international water safety program inspired by Charlie Hayes and the true events and characters of Baywatch and endorsed by the legendary director Greg Bonann and 7 international organizations.