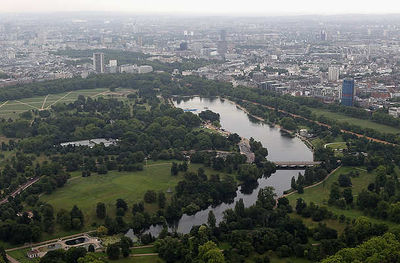 Aerial view of Hyde Park and the Serpentine where the Olympic Marathon Swimming 10km will occur at the 2012 London Olympics, photo by Tom Shaw of Getty Images 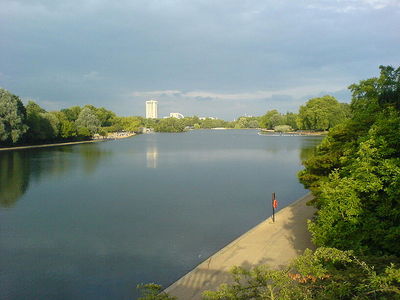 Geography of the lake

Originally the lake was fed by the River Westbourne entering at the Italian Garden at the north-western end of the Long Water. The Westbourne ceased to provide the water for the Serpentine in 1834, as the river had become polluted, and it is now supplied from water pumped from the Thames.

The Long Water runs south-east from this point to Serpentine Bridge, where the lake curves sharply to the east. At the eastern end, water flows out of the lake via a sluice in the dam, forming a small ornamental waterfall. Historically, the river flowed due south from this point marking the boundary between Westminster and Kensington, but since 1850, the river has been diverted into a culvert, running underground to join the Thames near Chelsea Bridge.

The lake is relatively shallow, with a maximum depth of 40 feet (12m).

There are two lakeside restaurants and various recreational facilities on the shore of the Serpentine, as well as the Serpentine Gallery and the Diana, Princess of Wales Memorial Fountain.

Detail of the 1746 John Rocque map shows the newly constructed Serpentine. The paths converging on the Round Pond to the west of the lake are also visible.

In 1730 Queen Caroline, wife of George II of Great Britain, ordered the damming of the River Westbourne in Hyde Park as part of a general redevelopment of Hyde Park and Kensington Gardens. At that time, the Westbourne formed eleven natural ponds in the park. During the 1730s, the lake filled to its current size and shape. The redevelopment was carried out by Royal Gardener Charles Bridgeman, who dammed the Westbourne to create the artificial lake, and also dug a large pond in the centre of Kensington Gardens (the Round Pond) to be a focal point for pathways in the park.

At the time of construction, artificial lakes were long and straight. The Serpentine was one of the earliest artificial lakes designed to appear natural, and was widely imitated in parks and gardens nationwide.

The lake formed a focal point for the 1814 celebrations commemorating the British victory at the Battle of Trafalgar, and of the 1851 Great Exhibition, with the Crystal Palace standing on its southern shore. Following the introduction of more stringent regulations to protect the environment in the park, the relocation of the Crystal Palace, and the construction of the nearby Albertopolis complex of museums and exhibitions, large-scale events ceased to take place on the banks of the Serpentine. However, it was the location for the 1977 Silver Jubilee of Elizabeth II celebrations, and will serve as a venue for the 2012 London Olympics.

In the 1820s, the park was extensively redesigned by Decimus Burton. At the same time, John Rennie the Younger built the Serpentine Bridge to carry the newly built West Carriage Drive along the boundary between Hyde Park and Kensington Gardens, formally dividing the lake into the Serpentine (east) and the Long Water (west).

A rectangular swimming area on the southern bank was opened in 1930. It is known as George Lansbury's Lido and is partitioned off from the rest of the lake by a perimeter of buoys.

There is a fee for entering the lido and changing rooms are available. It is normally open only in the summer, typically between 10:00 am and 5:30 pm, although members of the Serpentine Swimming Club may swim all the year round from 6:00 - 9:30 am. The Peter Pan Christmas Day Race is only open to regular participants of the Saturday swimming competitions during the winter.

Since 1864, the Serpentine has hosted a 100-yard (91.4m) swimming competition every Christmas morning. In 1904, author J. M. Barrie awarded the Peter Pan Cup to the winner of the race, a tradition which has continued ever since. Due to the hazards of swimming in freezing water, the race is open only to members of the Serpentine Swimming Club.

In the summer months, the Solarshuttle solar powered boat ferries passengers between the northern and southern banks of the Serpentine. At 48-feet (14m) long and carrying 42 passengers, it is the largest wholly solar powered passenger boat currently operating in the UK.

London's Holocaust Memorial is situated at the eastern end of the Serpentine, immediately beyond the dam, and a memorial on the northern shore of the lake commemorates the Norwegian Defence Forces' role in World War II.

The Diana, Princess of Wales Memorial Fountain is sited on the southern shore of the Serpentine near West Carriage Drive. It currently receives approximately one million visitors per year.